The Police team in the Agugu area of Ibadan has commended Nigerian youths for shielding their police station against a hoodlum attack. 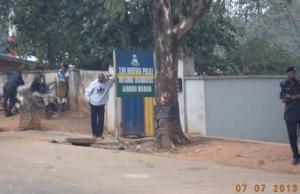 This is coming after the pandemonium in the country following the hijacked #EndSARS protest by thugs. A lot of public properties have been destroyed and some private properties burgled.

In a video on the micro-blogging site, Twitter, some youths of the locality were seen jumping for joy as they defeated the hoodlums who attempted to burn the police station to the ground.

Several reports has it that the hoodlums in most cases overpower the police, leading to the burning of most of the attacked police station.