Shot put athlete Chukwuebuka Enekwechi believes anything can happen in the final of the men’s shot put event of the ongoing Tokyo 2020 Olympic Games, as he vie for a place in Nigeria’s Olympics history books. 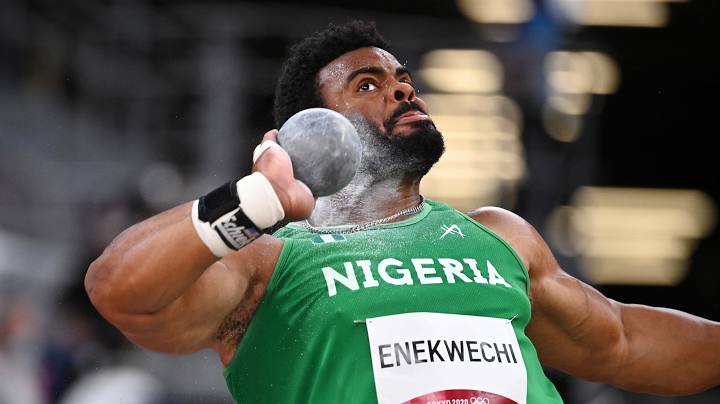 Enekwechi, 28, will be competing in the finals of the shot put event on Thursday (3:05 am Nigerian time) and is hoping to become the first Nigerian man in track and field to win an individual medal at the Olympics.

He is also the 2019 African Games champion and the reigning Nigerian National Sports Festival champion.

Now he is focused on making more history.

“I think in a competition anything can happen, so I’m glad that I made the final and I think I have a good chance of performing well,” Enekwechi said.

On representing Nigeria at the Olympics, he added, “It’s a big honour, I call it the PhD of athletics. It takes 10 years to earn it. So, I’ve earned it, I did it the right way and I made the final in my first attempt. I think it’s a great experience in that way.”

Chukwuebuka, had earlier posted a TikTok video on his Instagram page where he disclosed that he only had one jersey and had to wash it at night in preparation for the next day’s Games.

But the athlete insists he was “just having fun.”

“Right after the competition, I went in, I was worked out and sweating and just had to clean my jersey off for the next day.”