Home Sport Nigeria’s shot put athlete, Enekwechi cries out after he had to wash...

Nigeria’s shot put athlete, Chukwuebuka Enekwechi in a viral video was washing his Jersey ahead of the Tokyo finals. In the viral Tik Tok video, Enekwechi was seen washing his jersey so he could reuse it after he had secured a non-automatic qualifying spot as he prepares for the final.

The voice-over in the video indicated that the Nigerian athlete has only one jersey. 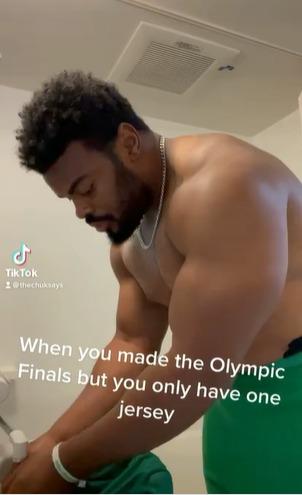 Enekwechi qualified for the men’s shot put final after his launch hit a mark of 21.16m at the ongoing Tokyo 2020 Olympics.

He secured a non-automatic qualifying spot for the final after clinching 4th position in Group B.