Infuriated by Lekki killings, an angry mob has allegedly attacked TVC station and set vehicles and the building on fire. 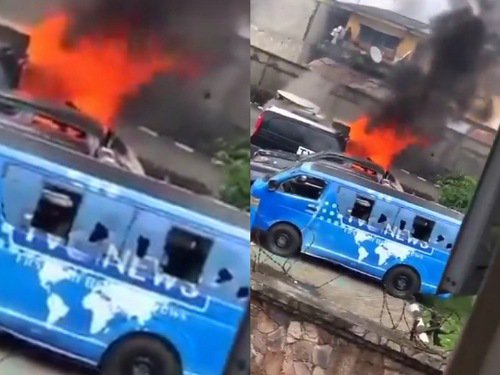 According to online reports, the incidence occurred this morning, October 21.

In the video, some youths could be seen holding containers of what is guessed to be kerosin and moments later, they poured the content on TVC buses in the vicinity and set them ablaze.

According to the voice in the video, the affected station is TVC located at Ikosi Ketu area of Lagos.

Reports also say that the station was temporary off air as a result of the attack.

Watch a video from the scene recorded by neighbours below;

According to WikiPedia, TVC News is a Nigerian 24-hour television news channel owned by Continental Broadcasting Service Nigeria Ltd. Now TVC Communications based in Lagos. The channel airs on British Sky Broadcasting Group Plc in the UK, Naspers Ltd’s DStv and Startimes in Nigeria, and Multi TV in Ghana.

Although TVC is owned by Continental Broadcasting Service Nigeria Ltd, the APC national leader, Bola Tinubu is said to be the actual owner and this explains why the station has been allegedly attacked.

Meanwhile in a related development, Tinubu has denied allegations that he sponsored the killings of unarmed protesters at Lekki toll gate last night.