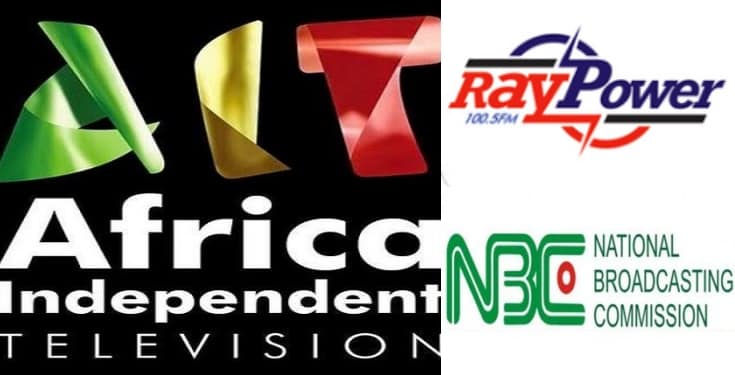 The Director-General of NBC, Malam Is’haq Modibbo-Kawu made this known on Thursday in Abuja.

Kawu said over the last two years, NBC summoned the management of the company to address issues regarding the operations of AIT and Raypower; particularly Political Platform and Kakaaki.

He explained that in one of its meetings with the company held on June 2, 2017 the commission expressed its disappointment with the way and manner hate speech, divisive and inciting comments are applied in discussion of national issues in breach of the provisions of the NBC Act and Broadcast Code.

According to Kawu, Daar Communications has over the years turned itself into a bad example of how a professional broadcast outfit should not be run.

“In their relationship with the NBC, Daar communications carry on as if it is beyond the regulatory direction of the commission.

“They don’t pay their licence fees as and when due and its broadcast is patently partisan and one sided and deliberately inciting and heating up the polity.

“The management of the Company has created the habit of using the channel to fight its personal battles contrary to the statutory requirements of the law.”

The D-G said on June 6 AIT and Raypower embarked on use of inflammatory, divisive, inciting broadcasts, and media propaganda against the government and the NBC for performing its statutory functions of regulating the broadcast industry in Nigeria.

“Recently, NBC monitoring reports on AIT and Raypower indicate the use of divisive comments accredited to the segment of “Kakaaki”, tagged, “Kakaaki Social”.

“Where inciting comments like, “Nigeria is cursed, “we declare independent state of Niger Delta”, “Nigeria irritates me”, “this country is gradually Islamising” and other similar slogans are used without editorial control in breach of the broadcast Code.

“Consequently, after several meetings with management of Daar Communications P.l.c and many letters of warning.

“The NBC, today June 6, 2019 took a decision to suspend the licence of Daar Communications Plc for failure to abide by the commission’s directives, the provisions of the NBC Act Cap N11 Laws of the Federation of Nigeria and the Nigeria Broadcasting Code.

“This decision is based on the provisions of Section 10 of the Third Schedule of the NBC Act Cap N11 Laws of the Federation of Nigeria, 2004, which states that where in the opinion of the commission the station has been used in a manner detrimental to national interest.

“NBC Act also states that where there is wilful or repeated failure to operate
substantially as set forth in the licence.

“Where there is violation of or failure to observe any cease and desist order issued by the Commission and where a provision of the Nigeria Broadcasting Code has been seriously breached. And the shut down order is until further notice.”