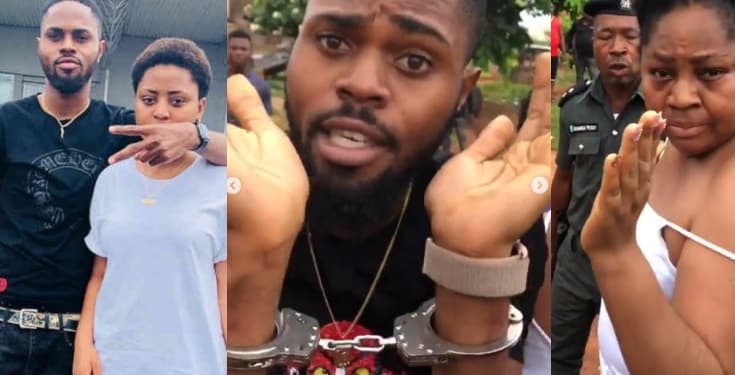 Delta State Police has arrested Regina Daniels’ elder brother, Lawrence for the 4th time. A video which has emerged on social media shows the moment the arrest took place.

His mother, Rita Daniels who was present at the scene of the arrest, claim the Police keep arresting her children, harassing them and taking away their peace. Lawrence also claims he did nothing to warrant the arrest yet he is being handcuffed.

Sammy West Daniels took to his Instagram page to explain what happened. He wrote;

“Let’s all stand for the truth why the injustice? Where are the freedom fighters? Intimidation and oppression is what we ought to stand for…….. Lawrence @sweezzy1 was taking his friends to the airport they stopped for their usual stop and search and noticed Lawrence was the one driving then one officer said this one is Regina Daniels brother then they dragged him out saying they’d take him to the station for no reason before myself and friends came to meet them up then they started shooting, when one of us tried video they punched his face if you look at the other video properly you’d see one was scared why do they keep dragging us out the moment my mom @rita.daniels06 came in the picture one officer said this is Regina’s mother so what wrong have we done remains what I don’t know……the other day people said Lawrence assaulted police so in this case what is it make we dey talk true government go do like say dem no dey see… I AM A FREEDOM FIGHTER I’d stand for justice SAMMYWEST SAYS SO”