Home Viral News Nigerian man quits his bank job for a life by the beach...

A Twitter user with the handle @Qossi_ took to the platform to share a bizarre story of an acquaintance who quit from his bank job.

According to the Twitter user, the young man quit his bank job to become a surf instructor for tourist. When queried on why he quit, the young man stated that he is tired of the fiercely competitive struggle in the job.

“An acquaintance recently quit his bank job as SBO, moved out of his 3 bedroom apartment at Ikeja and relocated to Tarkwa Bay to smoke weed and be a surf instructor for tourist. Far from the life I want but damn you can hear the genuine happiness in his voice when he speaks. Dude said he was tired of the rat race. Plus the tranquil, clean oxygen, the relaxed vibe, etc the beach rings.”, he tweeted. 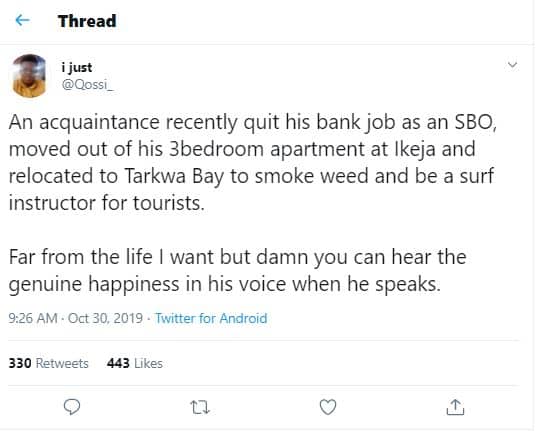