A Nigerian doctor identified as @urchilla01 on Twitter has come  to the defence of Igbo parents who stop their children from marrying outside their ethnic group. 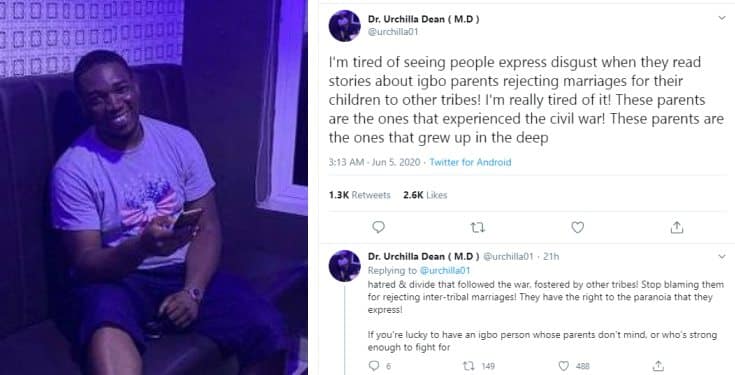 This come after a Twitter influencer ignited a conversation after she disclosed how the mother of her Igbo boyfriend, crashed their plan of getting married.

Reacting to the Twitter influencer’s disclosure, the young man said these parents are not to be blamed for rejecting inter-tribal marriages because they grew up in the deep hatred & divide that followed the war, fostered by other tribes.

He also pointed out that there is a lot of difference in traditional beliefs and practices between the different tribes in Nigeria.

Stop blaming them for rejecting inter-tribal marriages! They have the right to the paranoia that they express! If you’re lucky to have an igbo person whose parents don’t mind, or who’s strong enough to fight for both of you, then thank God for you; but by all means stop blaming these parents!

Again, it’s obvious there’s a lot of difference in traditional beliefs & practices between the different tribes of Nigeria! The way marriage is patterned in Nigeria, you’re not only getting married to your spouse, you’re also getting married into or to their family!

Don’t blame them for taking care to ensure they have in-laws who have the same values as them! Please dead this criticism, it’s all so cliche now! Also, if you’re dating someone, discuss these things!

Don’t wait till after 6 years of courtship & realise the family don’t want another tribe! Stop shooting yourselves in the damn foot! Urrggghh!

A lot of comments here just show that you people don’t understand that marriage is an “institution”. You think it’s just to find one person your heart is doing kikum kikum for & rush to altar E go shock you” 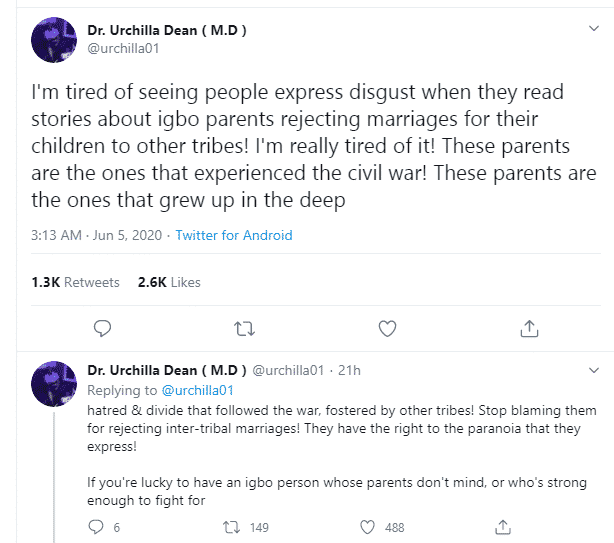