Home Viral News Man narrates how he was allegedly thrown out of a Lagos church...

A Nigerian man identified as Maxwell Honeymoon Ndamzi Iwezor has narrated how he was allegedly thrown out of a Lagos church by 2am because his dressing was ”worldly”. 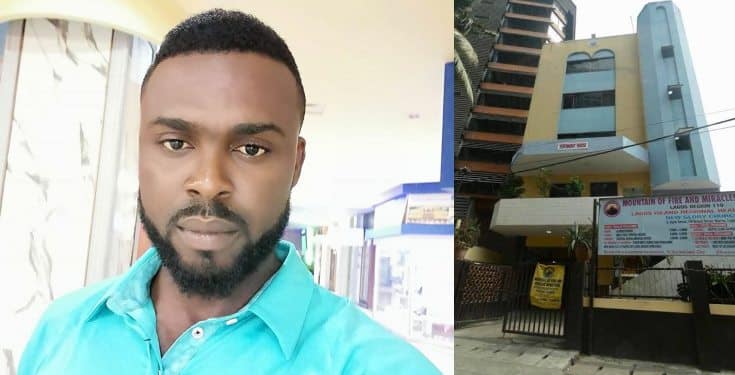 According to the young man, he walked into the church by 7pm after leaving a tailor’s shop who had just disappointed him around Mandillas in Lagos Island.

He said decided to spend the night at the church so he could go to his tailor’s shop to pick up his item in the morning.

However, he was allegedly kicked out around 2am by some members of the church who told him he can’t stay there because his dressing was “worldly”.

This is not a CALL OUT, there is no pain, anger or malice against this CHURCH in making this post, or at least not anymore. But this May made it 3years it happened and I just want to share. Might be a long read, just stay with me.

Sometime in May 2017, after leaving a tailors shop who had just disappointed me around Mandillas Lagos Island, I was sad, hurt, and disappointed. Let me add I was in a bad place spiritually, I was really Low. I was heading home when I passed this very Branch of MFM church. It was around 7pm as I walked past the church, its speakers blasting out one of my favourite worship songs. “You are Alpha and Omega”. I find strength in worship, and feel better afterwards. I walked to the security at the gate and asked him if a service was going on. He said yes. And I walked upstairs and joined the service.

I worshipped with them, and felt alot better after some serious spiritual gymnastics. I was about leaving, when I heard this announcement “please don’t forget to come back for our NIGHT VIGIL, by 12midnight”. I thought to myself I can stay for the VIGIL, then from there go back to my tailor, pick up my items and leave. They called for first timers and I stood up. I was the only first timer who came for the service, so the man who attended to me said it’s cool I want to stay for the VIGIL, that he will like the head Pastor to pray with me before I leave in the morning, and sincerely I didn’t mind.

12am, vigil starts. Someone walks to me and says, “you are not supposed to be here we don’t know you”, I said “yeah you don’t know me, I am a first timer”. He says “it’s workers VIGIL, and you are not a worker so you have to leave” I told him it’s too late to get my place, it’s already 12:30am. He says I can go upstairs to an empty hall, pass the night and leave in the morning. I said cool. I was given those materials used in decoration, to spread on the floor and also to cover myself. I didn’t complain. I was lying down there, then dropped a message to bae to tell her all the experience and where I was precisely, we chatted briefly and I said goodnight and I slept.

I was deep asleep, and very cold when I felt someone kick me. What a way to wake someone. I open my eyes and saw 4 men standing by my side, including the man who told me to wait for the VIGIL and also gave me where to pass the night. First question one of them asked me is “WHO ARE YOU AND WHAT IS YOUR MISSION HERE BEFORE WE SEND FIRE TO BURN YOU” I was dazed. They asked me to leave the church because they don’t know me. I looked at my time it was 2am in the morning, where the heck would I be going to by that time? I told them I was encouraged to stay by one of them, and that he gave me the space, I pointed at him and he didn’t deny it. I gave them my two phones, my driver’s license, my wallet which had over 30k in it, and my ATM card too. I asked them to hold onto those items, and by morning I will come pick them and leave. They refused collecting them from me and insisted I leave.

In Lagos Island, TINUBU SQUARE or around MANDILLAS. Being on the road around 2am is same as inviting robbery to yourself or even death in the worst case. The police sees you, they must pick you up or the area boys would feast on you. I reminded them how dangerous it was to be out by that time. I begged this four pastors like my life depended on it. The only one who looked sorry but helpless was the one who gave me the place to sleep. Others were mean, rude and harsh. I was not raising my voice, I was very cool in talking to them. One very short one, amongst them pulls me by the shirt, kicks my shoes towards the door and begins to push me. Saying the church isn’t a hotel, that I can’t stay in their church because my dressing is “WORDLY” Chelsea jersey, a black jean, and a black all stars footwear. You can imagine.

No one should place me in this position, not like I was helpless or homeless. Next thing the one who gave me the space begs for me. The other 3 attacks him, and shuts him up. We get to the church gate and these CHURCH PASTORS, opens the gate scolds the security for letting me in, and watched me walk into the dead, cold, and dangerous night. I could have gotten robbed, killed, or even picked by some unfriendly police officers and accused of a crime, these men didn’t care. I thought at least in a time such as that, as a Christian, even if I had nowhere to get shelter, at least a church WOULD NOT be the one sending me out by almost 2:30am. 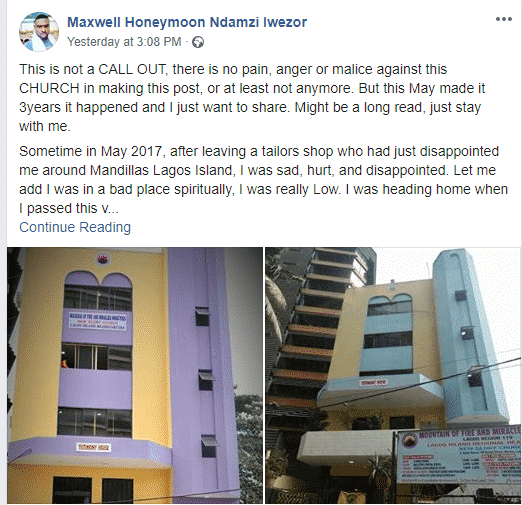