Home Viral News LASTMA Officer screams, as driver speeds off with her on the bonnet... 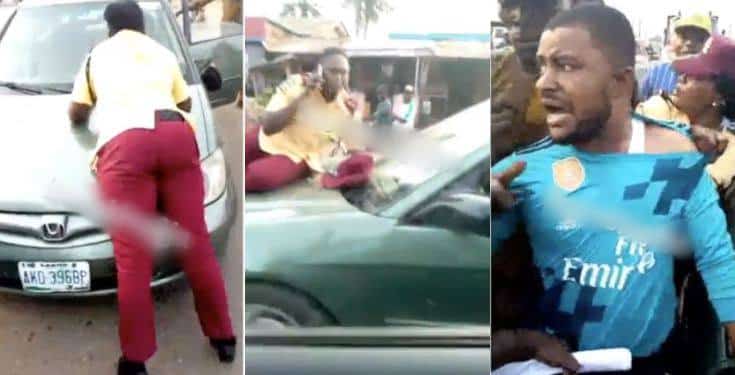 Seriki Adeyinka, an official of the Lagos State Traffic Management Authority (LASTMA), has told TheNation, how a taxi driver hit her and drove off on high speed while she hung on the bonnet of his car in Ikorodu.

TheNation quoted her as saying the incident happened around 6:35 pm on Thursday, noting that she was on the car’s bonnet from Igbogbo garage on Ikorodu road to Oluwanishola filling station on Baiyeku road.

“I was at my duty post with another colleague. Usually, anytime from 4pm, traffic gets busy in the area. We were controlling the traffic when the taxi driver was coming and also picking passengers at the middle of the road, he caused a lot of traffic behind him.

We told him to leave the middle of the road but he refused, I was trying to stop him to let him know that what he was doing on the road was bad, but while he sped off, he hit me with the car and I fell on the bonnet of the car.

While the car was moving people were trying to stop him but he was speeding and no one could stop him. Even when a trailer was coming, he tried to swerve me to the trailer maybe I would fall off from the bonnet, but as God would have it, I did not fall because I was holding the bonnet tightly.

But thank God an eyewitness who was driving behind was later able to overtake him and he stopped at Oluwanishola filling station on Baiyeku road”.