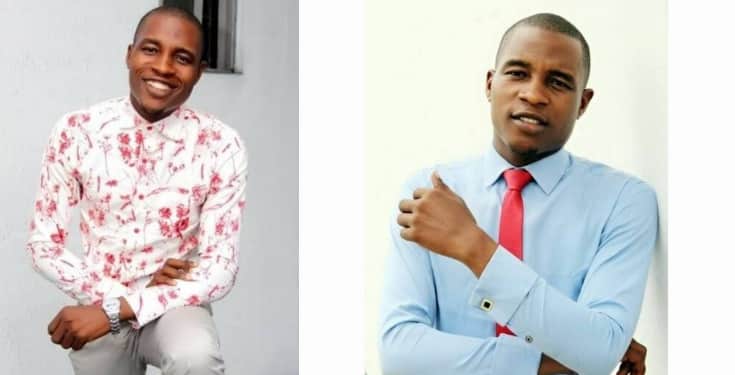 A distraught Nigerian man took to social media to reveal that his marriage scheduled to hold this weekend, Saturday April 20, 2019 has been cancelled by the bride.

The young man identified as Marshal Bernard narrated how he did all he could to prevent the cancellation all to no avail.

WEDDING CANCELED!!I was supposed to sugarcoat this, but I’d rather put it all out for your clarity and my sanity. 1. Today, Monday April 15, I was supposed to do a bulk SMS reminding everyone about my wedding this Saturday, April 20. But yesterday, Sunday, April 14, my bride canceled the wedding. Let’s just chuck it up on ‘irreconcilable differences.’ 2. All efforts to get her to reconsider until 1am last night proved ineffective.

I respect her decision, but I wept like a baby. I could have done the unthinkable at midnight yesterday, but there is someone in me, called the Holy Spirit. He wouldn’t let me do that. Right now, I’m fine, believe me. 3. Part of the nightmare came from how I would be embarrassing the senior people in my life who I had invited to the wedding, some of who have already made financial commitments. The traditional rites would be holding this Thursday, April 18, and more than 85% of everything was in place for both the tradition and white wedding. Again, I wept like a toddler. 4.

This is an apology to the general public which I have invited to the wedding, some of who have already bought gifts, made flight and hotel reservations, etc. I respect you enough to give this explanation. I am truly sorry for this mess. To my sponsors, I am sorry. 5. The bachelors’ eve was scheduled for Friday night (6pm) tagged Night of Tongues. That will still hold. The brothers are fired up, and would still want to do it for me. It’ll be an evening of tongues, made-in-Akwa-Ibom afang soup, and all the wine that was supposed to be used for the wedding. (All drinks had been bought).

Venue is Delta Hotels, and it is open to females as well. 6. I will not be disabling the comments section, but I will not be answering questions here either. 7. “In the world you will have tribulation. But be of good cheer, I have overcome the world.” 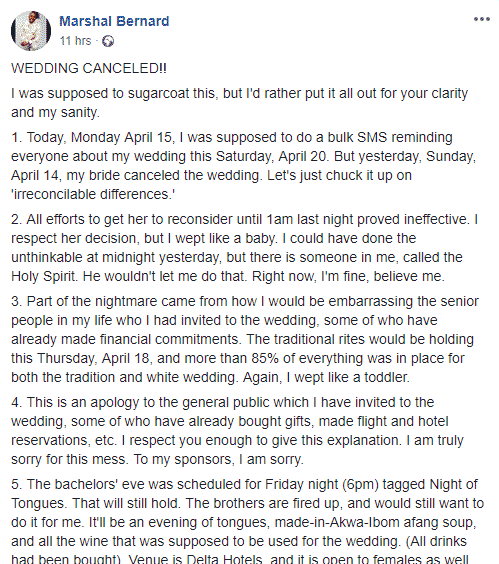