South African gospel singer, Dr Tumi took to Facebook to claim he had rejected an offer to join an illuminati society.

The singer, whose real name is Tumishang Makweya, claimed he was offered $1 million (₦360 million) a month to become a member. The illuminati is supposedly a secret society made up of people who rule society.

Dr Tumi wrote: “So early today they tried to recruit me to join an illuminati society. Got told I have been noticed and would be of value.

“Got promised $1 million a month and great fame…

“But we are not the type you can buy with money. I won’t leave Jesus for fame or fortune. I was already bought with the highest price when Christ gave his life for me.” 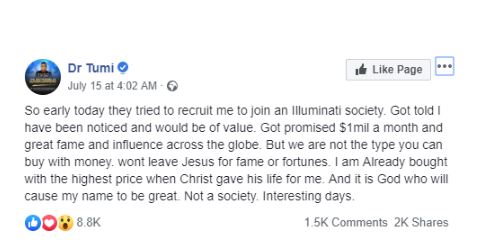