Veteran actress, Genevieve Nnaji has joined Nigerian celebrities in condemning the xenophobic attacks carried out by South Africans against foreigners, mostly Nigerians in their country.

The attacks and killings have so far led to an outrage on social media and beyond.

Genevieve, speaking on the development, stated that South Africans had shown Nigerians countless times who they were.

The 40-year-old actress, on her Instagram page, wrote; “A life with us isn’t the worse thing. They need to see one without us. They’ve shown us countless times who they are. Let’s believe them.

“It’s time to show them who we are. But most importantly, it’s time we believed in ourselves. They see our potential; our greatness. We need to see it too.

“It’s tough out here I know, but sooner than later we’ll have to realize it’s all we’ve got. We have to make sure our energy and resources are beneficial to all things Her.

“We can’t ignore the signs much longer. Change is inevitable. Let us stay ahead of it. Long live Nigeria.” 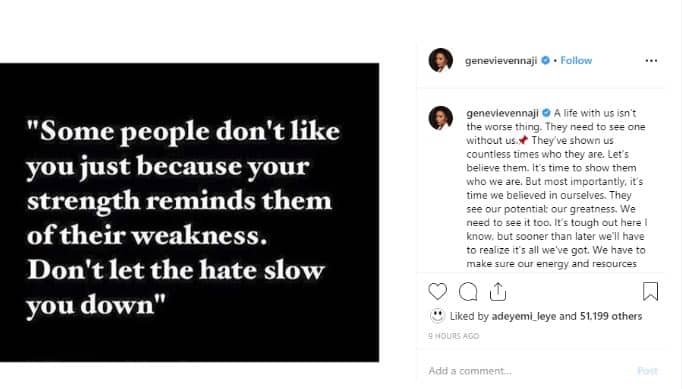