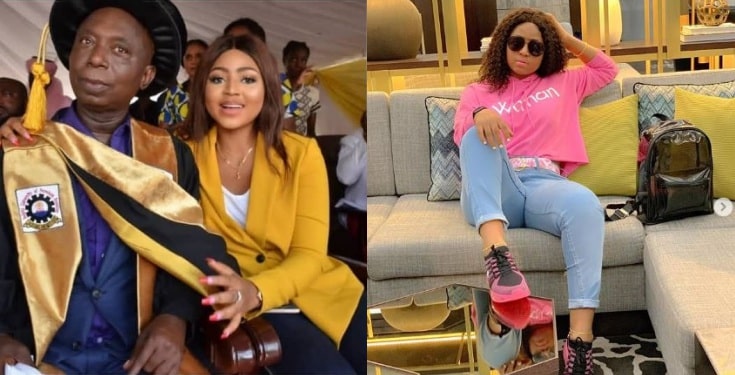 According to a report by e-nigerianng.com, the newly wed actress is 4 months pregnant for her alleged billionaire husband, Ned Nwoko.

Read the full report by the platform:

Regina Daniels Pregnant: After www.e-nigeriang.com in an exclusive report, revealed the source of teen actress, Regina Daniels sudden wealth as well as her eventual secret marriage to Honourable, Prince Ned Nwoko, it became an internet sensation…

However, being the original source of the story, we can again authoritatively say here and now that there is more where that came from.

Speaking to e-NIGERIA! exclusively during the weekend, a family source hinted that 18-year-old Regina Daniels who just got hooked to her 59-year-old lover, Ned nwoko is already 4-months pregnant.

Buttressing further, the source revealed thus, “not only is she pregnant, but for now, Regina Daniels remains Ned Nwoko’s most favourite wife, with unlimited access to his most expensive cars, houses, as well as his private jet which she brandishes all about.

None of Ned’s wives nor concubines are said to have access to his Rolls Royce (valued at over N100 million), his expensive Ferrari, his private jet as well as his latest delivery; a Mercedez Brabus with an Abuja number plate, YAB-486 BH except Regina”, squealed our source.

Furthermore, e-NIGERIA! also gathered that, ahead of her baby delivery, Mr. Nwoko has also acquired a house for Regina in a yet to be disclosed location in London.