Folarin Falana, the Nigerian rapper who is popularly known as Falz, has called on Nigerians to stop further attacks of South African business located in Nigeria.

Falz said this while reacting to a statement by Osinbajo on his Twitter page condemning the xenophobic attacks on Nigerians and other African nationals in South Africa.

Osinbajo had on Tuesday condemned the xenophobic attacks describing it as unfortunate.

But, Falz responding to his comment on Twitter, asked Osinbajo to reveal actions being taken by the Nigerian government.

He wrote: “We all know what it is, What is being done about it?

The rapper further called on Nigerians to stop violent attacks on businesses in Nigeria.

According to him, violence will not solve the problem but rather heightens it.

“This a very difficult time for everyone but violence is never the answer.

“Attacking people or vandalizing businesses in Nigeria will not solve the problem, but will rather make things worse.

“We are hurting our own selves! Please,” Falz added. 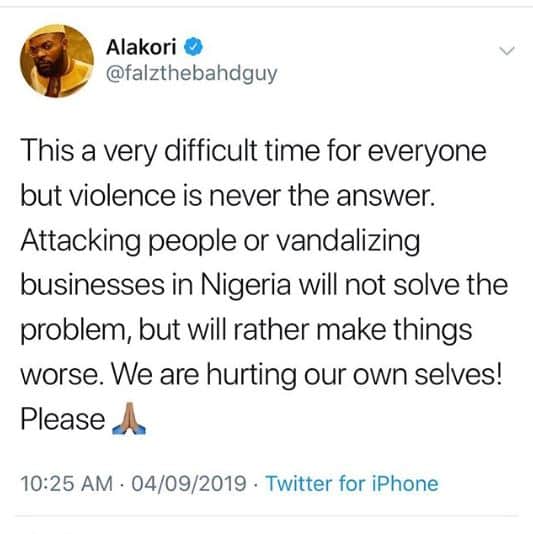