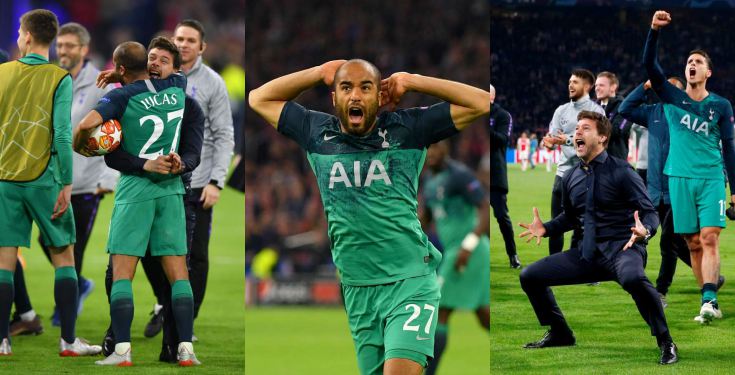 Lucas Moura’s incredible second-half hat-trick saw Tottenham snatch a 3-2 win at Ajax and a place in the Champions League final on away goals.

As in last week’s semi-final first leg, Erik ten Hag’s side were smoothly into their work by the time inspirational captain Matthijs de Ligt headed a fifth-minute opener.
Hakim Ziyech made it 2-0 10 minutes before half-time but, in a season now steeped in implausible Champions League comebacks, Lucas’ brace had the game all-square on the night before the hour.

De Ligt powered home Lasse Schone’s early corner but Spurs’ response was initially encouraging, with Son Heung-min almost catching out Andre Onana when he hit the base of the post.

Ajax appeared to have a foot in the final when Donny van de Beek and Dusan Tadic combined in slick fashion on the break, with the latter teeing up Ziyech to finish emphatically.

Onana made a stunning reaction save from Alli eight minutes into the second half but had no chance when Lucas darted beyond Schone’s challenge to reduce the arrears.

Fernando Llorente was then thwarted from point-blank range by Onana but, like Hugo Lloris before him, his defence could not bail him out and Lucas showcased brilliant footwork to create space and dispatch a shot in a packed penalty area.

Ziyech was inches away from his second in the 61st minute and the chaotic feel continued as De Ligt denied Lucas a quickfire hat-trick before testing Lloris at the other end.

Moroccan Ziyech hit the upright and tested Lloris one last time either side of Vertonghen heading a set piece against his former club’s bar, but it was Lucas who produced the devastating final twist.