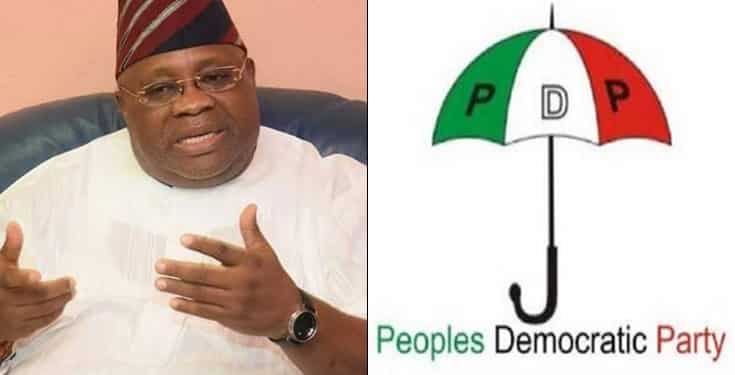 The People’s Democratic Party (PDP) yesterday alerted that the life of its Osun State governorship candidate, Senator Ademola Adeleke, is in danger.

Briefing journalists in Abuja, the party, through its National Publicity Secretary, Kola Ologbondiyan, alleged that “certain desperate elements of the All Progressives Congress (APC), who are unsettled that they cannot stop Senator Adeleke from retrieving his governorship mandate freely given to him by the people of Osun State, are now viciously plotting to use all means to put him out of circulation.”

“Given the series of unrelenting attacks, threats and the desperation now being exhibited by the APC, our party has become apprehensive that there are plots to silence Senator Adeleke as a way to terminate his efforts to retrieve his governorship mandate in the court.

He said: “Part of the plot is to frame and arrest the Principal of his (Adeleke’s) school, Ede Muslim High School, Ede, Mr. Kadili Adejare Abass, on trump-up charges that Senator Adeleke’s School testimonial was forged with the aim of using such fabrication as a basis to smear and clamp down on Adeleke.

“Yesterday, April 24, 2019, the Nigerian police in collaboration with the APC arrested Mr. Abass, the Principal of Ede Muslim High School, Ede, as well as the wife of the school’s Registrar, Mrs. Rofiyat Oladepo and her nine months old baby.

“Information available to the PDP shows that AIG Adeleye Oyebade of Zone II, Osogbo, ordered the arrest of the innocent principal of the school and the registrar.

“When the registrar, Mr. Kabir Oladipo, could not be reached as he is undergoing treatment for legs and arms injuries he sustained in a motor accident, Oyebade allegedly ordered one ASP Faliyu to arrest the wife, Mrs. Rofiyatu Oladepo, with her nine months old baby. Both the innocent mother and her baby were dumped at the Zone II Police Headquarters, Osogbo.”

It also implored the APC and its allies to end their schemes against Adeleke.

It, therefore, asked Nigerians to hold the APC and its agents responsible should Senator Adeleke becomes a victim of any harm or sudden disappearance.