Viral video footage captures the moment a man went down on his knees to thank his darling wife for marrying him. 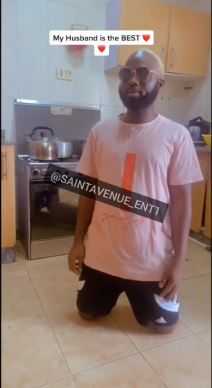 In the clip, his wife who assumed the role of a videographer could be heard asking him some questions while he gave his honest answers.

The man while speaking thanked his wife for marrying him and disclosed that if he had married another undisclosed lady, he would have divorced her by now because he wouldn’t have been able to cope.

He further stated that what caught his attention in his wife was the fact that during courtship, she never requested anything from him, rather he was the one who willingly gave when he wanted to. This according to him, heightened his interest in her.