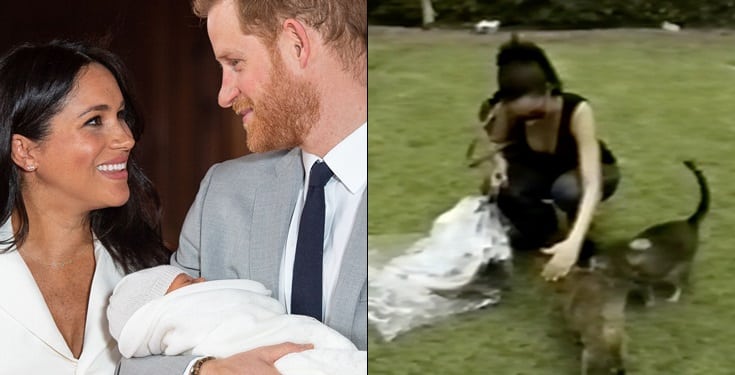 Prince Harry and Meghan Markle announced their son’s name to the world on Wednesday and, since then, people have wondered why the name Archie was chosen for the royal baby.

A former friend of the Duchess of Sussex has now shed light on two possible reasons for why Meghan chose the name.

The former friend reportedly said Meghan used to have a cat called Archie and she believes she may have named her son after the dead cat. Meghan previously shared a video of herself with the cat.
The former friend told The Sun: “Doria [Meghan’s mum] rescued Archie and he became an important part of the household. Meghan loved playing with him and she was always talking about him to her friends. It’s no surprise she named her new baby Archie. She loved that cat.”

The friend also suggested the royal baby could have been named after the main character of the American comic book Archie. Meghan reportedly obsessed with the cartoon character as a child and used to visit comic stores with her now-estranged father Thomas.

The former friend is quoted as saying: “This could be a little nod to her dad. It was him who instilled that hobby into her, that was their activity together. He would drive her around and also surprise her with vintage volumes. She had at least 100. This may be a way to reach out to her dad, even after all that’s happened.”

The Duke and Duchess of Sussex revealed that their son’s full name is Archie Harrison Mountbatten-Windsor. Harrison means “Henry’s son” which makes sense because Harry’s birth name is Henry. Mountbatten-Windsor, according to Wikipedia, is the personal surname used by some of the male-line descendants of Queen Elizabeth II and Prince Philip, Duke of Edinburgh.