Home Viral News Man narrates how he helped a footballer friend twice even after he... 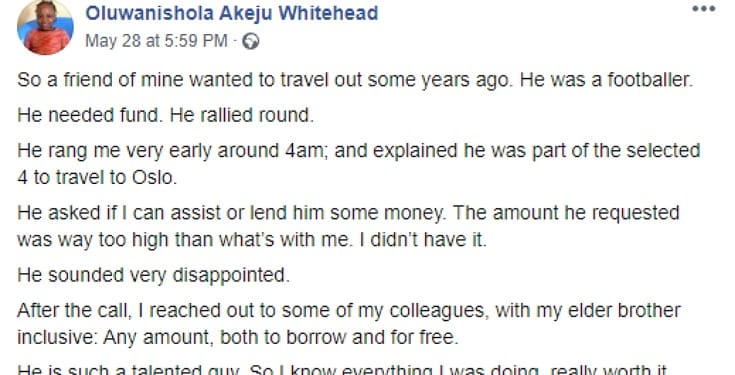 A Nigerian man identified as Oluwanishola Akeju Whitehead has recounted how he helped a footballer friend twice even after he stopped talking to him after becoming successful.

According to the yound man, he reached out to some of his colleagues to raise the money needed for the footballer to fund his travel to Oslo.

He further recalled how his friend stopped picking his call after he tried reaching out to him while still in Norway.

However upon learning that his friend was brought back to Nigeria after he broke his leg, he made a donation and also reached out to other people to help because according to him a “friend will always be a friend”.

So a friend of mine wanted to travel out some years ago. He was a footballer.

He needed fund. He rallied round.

He rang me very early around 4am; and explained he was part of the selected 4 to travel to Oslo.

He asked if I can assist or lend him some money. The amount he requested was way too high than what’s with me. I didn’t have it.

After the call, I reached out to some of my colleagues, with my elder brother inclusive: Any amount, both to borrow and for free.

He is such a talented guy. So I know everything I was doing, really worth it.

In days, I was able to get more than half of the amount he requested.

I called him back. Sent him the money. And he was very happy.

He got help and then traveled.

Subsequently, I didn’t hear from him. No means to reach him. Nothing.

One day, I ran into his Instagram page after going through another friend’s wall.

He has changed. Everything about him changed. He’d moved from Oslo to Nuremberg. It was almost 2 years that he left the country then.

I was really happy for him. I sent him a message and requested his contact.
There was no reply. I sent him another one. Made comments for him to check his inbox. No reply still.

I spoke with that my friend, which through him I stumbled on his page. He shared with me same thing.

He told me he got his number from a member of his family and had called him severally but he wouldn’t pick.

I collected the number and I called him. He answered his call. I was glad to hear from him, even though he wasn’t cheerful.
Money indeed sometimes change the way people talk.

I told that my other friend and he wasn’t surprised. So I stopped ringing him.

2017, I heard he came home to his newly built houses. I didn’t look for him even though we were both in the same city till he returned.

Then I saw him in Adamasingba stadium last year. He could barely walk well. I was told he was brought home.

This year, there was a fundraiser for his leg. I saw it and I couldn’t get pass it.

A friend will always be a friend. I made my donation and also reached out to people for him again.

This time around, he isn’t aware of all i did.
But it doesn’t matter.

Kindness to all, Without any reason.

My take away here is:
Do not forget your friends, when it is well with you.” 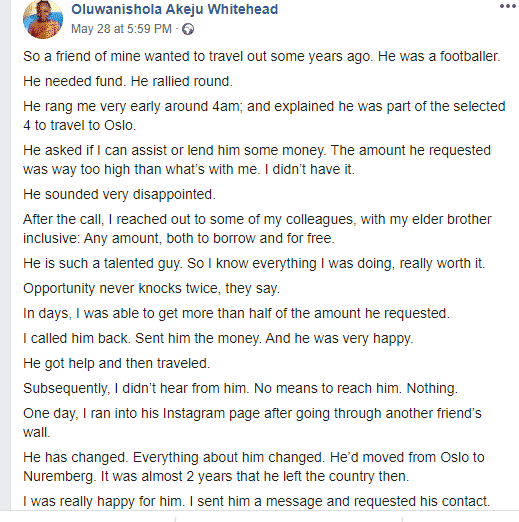