Home Viral News Lady reveals what she did to a man who gave her N2k... 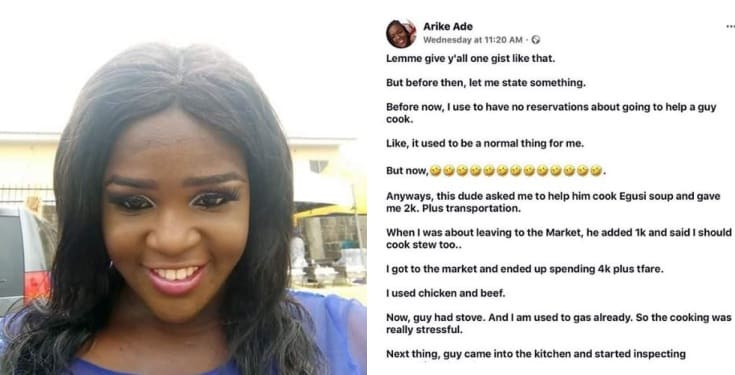 A Nigerian lady, Arike Ade took to social media to reveal what he did to an ungrateful man who gave her N2k to help prepare Egusi soup.

According to her, the man gave her N2k to prepare Egusi and additional N1k to cook stew, but she ended up spending more than the amount she was given at the market.

When she returned from the market, the man inspected all the items she bought hoping to detect some kind of fraud.

But before then, let me state something.

Before now, I use to have no reservations about going to help a guy cook.

Like, it used to be a normal thing for me.

Anyways, this dude asked me to help him cook Egusi soup and gave me 2k. Plus transportation.

When I was about leaving to the Market, he added 1k and said I should cook stew too..

I got to the market and ended up spending 4k plus tfare.

I used chicken and beef.

Now, guy had stove. And I am used to gas already. So the cooking was really stressful.

Next thing, guy came into the kitchen and started inspecting everything I bought.

And asking the price. Down to Maggi.

‘How much chicken? How much meat.? How much oil. How much groundnut oil.You didn’t price this meat well? Is this two cups of Egusi? Looks kinda small.

All these he said with a tone that suggested I probably was trying to cheat him.

On top my stress and extra one thousand I added.

I didn’t say anything o.

When I finished, I took plastic plates and packed the food inside. Both soup and stew. Put it inside nylon.

Went to the room and gave him 3500 and went home with the food.

The 500 extra was for his plates and kerosine and kitchen space I used.

Dude sent me a text that I was a wicked girl and i lacked training and I don’t have the patience to keep a man..

On a normal day, I wouldn’t even do that. Ill just come home and rant to my friends But that day, something in me just hahwhjahsus.