Home News Lady narrowly escapes death after friend whom she once housed sent someone...

Lady narrates an escape story in the hands of her ex-roommate who arranged with her boyfriend to molest and beat her.

According to a Twitter user identified as @Grace_Undilluted, a lady whom she once allowed to move in with her paid a surprise visit to her new apartment after separation.

The suspicious visit ended up confirming the narrators’ concerns as her boyfriend snuck in afterward to attack her with a wooden object.

“On Friday 12/11/2021, past 8pm. I was in my bathroom having a bath when I heard footsteps in my balcony, i paused for a minute and listened to the footsteps approach my door so I asked who it was and Bukky, a girl that lived in my house for years and early this year, I left the House for her answered. I was shocked because she rarely comes around and even if she wanted to, she usually call first. I told her to come in that I was having a bath.

We exchanged pleasantries and I asked why she came around and she told me that she just wanted to check up on me. That was awkward but I didn’t say. She asked if I was alone and I said yes she asked again if my sister isn’t back and I told her yes, that she will be back but it’s not yet time. She said alright, I just wanted to check on you and she left while i was still having my bath.

After having my bath, I walked straight to my fridge where I kept my phone because the electricity went off while I was in the bathroom even before The lady came in. Picking up my phone and turning to my wardrobe I heard footsteps again at the balcony so I asked again, who it was but no one answered. I asked continuously but no one answered so I went to the door instead to jam it while telling the person to stay out that I was naked.

Trying to jamlock my door, the person pushed it back and I saw a masked face (not with face mask but with a piece of cloth) so I repeatedly asked who are you, what do you want while I drag the door with them. At some point, I stopped asking and started screaming for help calling my neighbor who was seeing a movie in her room with an earpiece and her door was locked.

They pushed me into the room, to my bed and one was repeatedly hitting me. When I realized what was about to happen, I started fighting harder, I got up, made it to my door which of course they didn’t know how to jam as it requires prior knowledge to Jam and I ran out miraculously straight to My neighbor’s door and kept calling her to help.

They caught up with me in split seconds and the beating continued while trying to drag me inside. Apparently, they were misinformed. They were told that no one was in the house because my male neighbor who is a lecturer traveled earlier that day and because the other lady was in with her door locked and no sign of light, Bukky felt I was alone and that was the information they were working with.

My neighbour’s friend who was sleeping heard the noise, woke up and taped her to remove the earpiece and quickly they opened door. When they saw that someone was in the room, they quickly hit me with a pestle like wood, I collapsed and they ran out the gate. My neighbor and friend dragged me into her room and tried helping with ice (I guess). Minutes later, I saw myself sitting and the house was filled With crowd.

My Dad was the emergency number and he was contacted, he asked them to take me to the hospital, sent some money while he try getting a flight ticket from Lagos. I asked her to call my doctor after which she asked for help to get me to my room so I can get dressed.

Getting to my door, I noticed a black sweater so I picked it up (it reeked of weed) then I found the piece of cloth that one of them used as face mask and I was shocked. It was a piece of my bed shit in the house I left for Bukky and I recognized it. We gathered all they left behind and went to the police.

The police gave us a form to fill, after which we went to the hospital. With the information, they decided it was best to go to her place. Getting there, she was asked about the bedsheet and she claimed she gave it to her boyfriend. They found The pillow case and when she was brought in for questioning, she admitted the bedsheet was hers and identified the boys.

Apparently one is her boyfriend and he just got out of prison where he was being remanded for a different crime and the police confirmed my case was their
Third case and he actually have a court hearing on the 16th for another pending case. During questioning, it was discovered that they didn’t come to steal but rather rppe and “beat” me which is crazy because according to the IPO you don’t use such weapon to beat someone, you use it to klll.

This exactly was one of the reasons I left the house for her. She was constantly bringing men to my house and I wasn’t comfortable and when I couldn’t endure anymore, I rented another place and left. We never had any confrontation whatsoever.” 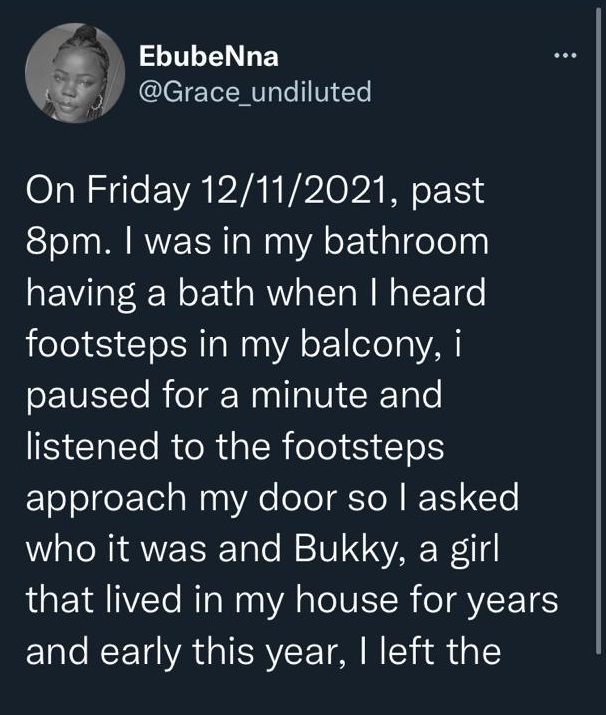