Members of the Kaduna State House of Assembly have fought dirty over the impeachment of Deputy Speaker, Mukhtar Hazo. 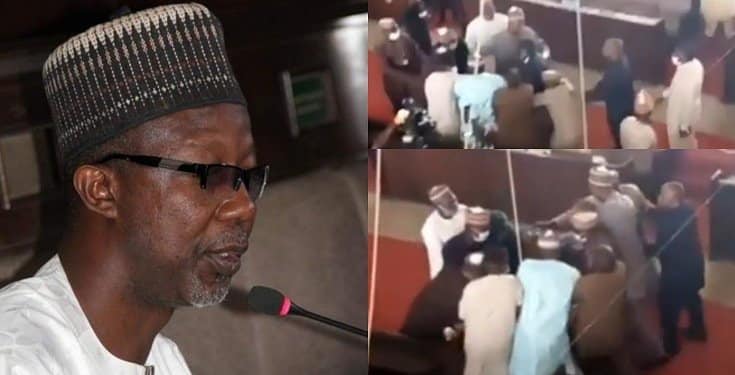 Following the impeachment of Hazo who only lasted 4 months in office, the lawmakers elected the member representing Kauru Constituency, Isaac Auta, as new Deputy Speaker.

His impeachment notice was signed by 24 members of the assembly.

Sequel to the above, lawmakers in support of the former deputy speaker exchanged blows with other members in the process of trying to remove the mace of House after the impeachment process.

In his reaction, the Speaker, Zailani told Channels Television that the impeached deputy was the architect of his own misfortune.

Zailani accused Hazo of conniving with other lawmakers to remove him as the speaker.

He also claimed that the former deputy speaker committed some infractions that were against the rule of the House.

Earlier, some policemen and other security operatives stormed the Assembly Complex over the plot to impeach the speaker who was elected into office on February 25.

It was gathered that some lawmakers who were not cool with his style of leadership were said to have perfected plans to impeach him during plenary.

In a bid to prevent breakdown of law and order, entrances leading in and out of the Assembly complex were barricaded by security details.

Watch video of Kaduna State lawmakers dragging the mace of the House below;