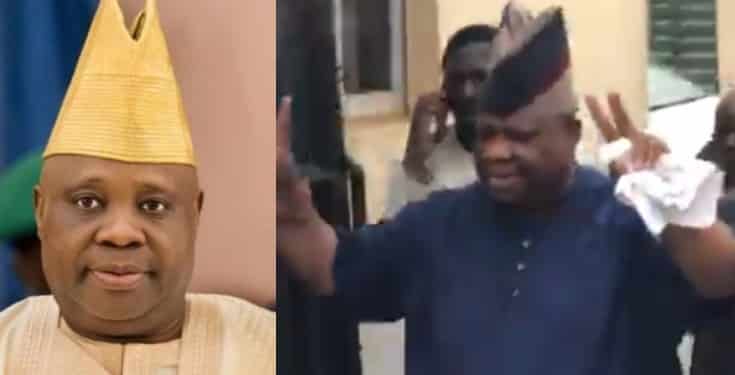 The Osun PDP gubernatorial candidate, Senator Ademola Adeleke has arrived at the Mpape Magistrate Court where he is to be arraigned by the police on Tuesday.

The Peoples Democratic Party (PDP) via a tweet, revealed that the Senator arrived the Court about some minutes before 10:00 am.

The party tweeted on the arrival of the Senator, attached with a video of him stepping into the premises of the court and captioned the tweet as thus; “#RescueNigeria Senator Ademola Adeleke arriving the premises of the Mpape Magistrate Court @UN @USEmbassyAbuja @UKinNigeria“

The Nigeria Police Force (NPF), had on Monday night, said  Ademola Adeleke, was detained in connection with an ongoing criminal investigations against him.

The People’s Democratic Party (PDP), had earlier issued a statement saying that the  the Osun West lawmaker honoured an invitation at the force headquarters in Abuja before he was detained.

The statement said Adeleke is being victimised over his pursuit of the retrieval of the governorship mandate freely conferred on him by the people of Osun state.

Adeleke’s campaign organisation also accused the police of working for Oyetola and the ruling All Progressives Congress (APC).

The PDP claimed that the plot was aimed at forcing Adeleke to drop his governorship ambition.