Home Viral News “I want cash, how will sorry feed me” – Policeman caught on...

Policeman gets caught on tape threatening to impound a car for not having tint-permit as he requests for a bribe to be paid in cash. 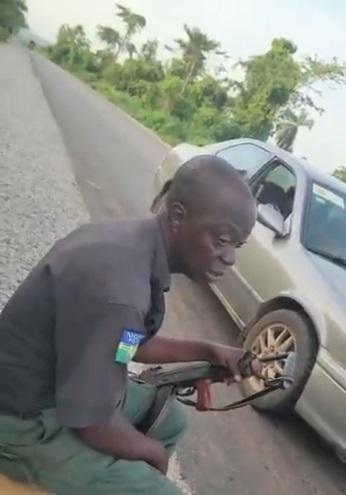 In the video shared by a Twitter user @YemieFASH, who was flagged on a highway in Ekiti for not having the necessary car permit, a policeman could be heard telling the driver not to plead to him that instead, he should pay him a bribe in cash even when the driver offered to do a bank transfer.

Ekiti people, see one of the corrupt policemen in your state, I will leave you to do justice to him. This happened today around igbara Odo, Ekiti State. Fish him out. Cc:@PoliceNG_CRU @Debiwumi @AsiwajuOladimej @Preciou_queen pic.twitter.com/POu1hEG9yZ