Four persons, including a lady, were, yesterday, set ablaze by a mob in Otuo, Owan East Local Government Area over allegation of kidnapping an SS III female student and killing her for ritual purpose.

It was gathered that the victim, a student of Azama College in Ikhuera quarters of the rustic town, was allegedly sent to buy sachet water by her neighbour Sunday night.

A source said while she was on her way from buying the water that her head was severed from her body apparently for ritual. 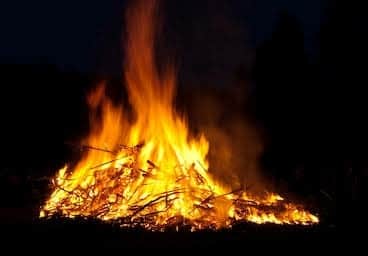 It was also gathered that when the young girl’s parents could not find her, they raised the alarm, but her whereabouts remained unknown.

The source said one of the culprits caught in the early hours of yesterday while attempting to dump the victim’s body confessed to the crime and those involved, including the woman, who allegedly performed the rituals for them.

“The two boys were burnt this morning (yesterday) along with the woman while her house was razed. They were all dragged to the popular ‘Women Centre’ where the community police station is located. The third boy was traced to his farm and apprehended,” he said.

Vanguard gathered that the third man apprehended in connection with the ritual killing was later burnt by a mob late yesterday.

One of the suspects, the gang leader, identified as Lukeman, was alleged to be a serial killer while two of the boys, who accompanied Lukeman, are of same parents and from Ikhueran quarter, Otuo.

He also said the woman, who performed the rituals was from Kogi State while Lukeman is said to be from Auchi in Etsako West Local Government Area of the state.

Spokesman for Edo Police Command, Mr Chidi Nwabuzor, while confirming the incident, said it was only two of those arrested that were burnt.

“The command is aware that a young girl’s head was cut off and the youths of the community arrested two suspects they took to the station where they were set ablaze,” he said.