Popular Nigerian singers, Michael Ajereh alias Don Jazzy, and Tiwatope Savage alias Tiwa Savage, have been picked up and quizzed by the DSS. 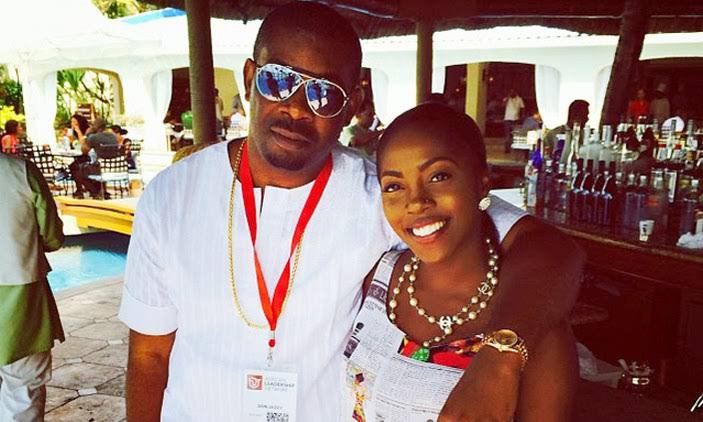 Both were at the State Security Service, self-styled as the Department of State Services for questioning over alleged political utterances against the administration of President Muhamamdu Buhari.

Recall that months ago, following a sharp rise in sexual assault cases across Nigeria especially against women, Tiwa Savage began a movement known as “#WeAreTired” in protest of the situation. A movement that was hash tag based.

Through the online protest, Tiwa called on Buhari’s administration to take action to stem the tide of rape in the country.

According to SaharaReporters, this in addition to several other posts on social media calling on the government to live up to its responsibilities to Nigerians earned Tiwa Savage an invitation by the DSS.

Together with Don Jazzy, Tiwa was invited to the DSS office in Lagos two weeks ago during which they were warned to be careful with their posts on the social media.

Shortly after that episode, the two celebrities together with colleagues Yemi Alade and Waje were summoned by the Lagos State Commissioner of Police, Zubairu Muazu, who while sharing efforts they were making to tackle rape and other problems in the state and country, warned the musicians to steer clear of political comments in order not to incur the wrath of the President Buhari administration.

A member of Tiwa Savage’s management team, who confirmed the development to SaharaRepoters, said that the multi-award winning female artiste will not stop speaking for Nigerians regardless of any move by governnent.

But as if to confirm the subtle warning from governnent, Don Jazzy and Tiwa Savage both appear to have toned down their social media posts in recent days after the meeting with the DSS and police in Lagos.

For example, Don Jazzy, who is known to actively engage his numerous followers on social media, last posted anything on Twitter more than 22 hours while Tiwa never continued with her hashtag after the meeting with DSS Director at their Shangisha, Lagos office.

Apart from the two celebrities, the DSS has also invited a former deputy governor of the Central Bank of Nigeria, Obadiah Mailafia, over his comments on the operations of Boko Haram in the Northern part of Nigeria.

In reaction to the development, a concerned fan asked Don Jazzy on an Instagram Live session if he was recently picked up and quizzed by DSS and below is his “unbothered” response;