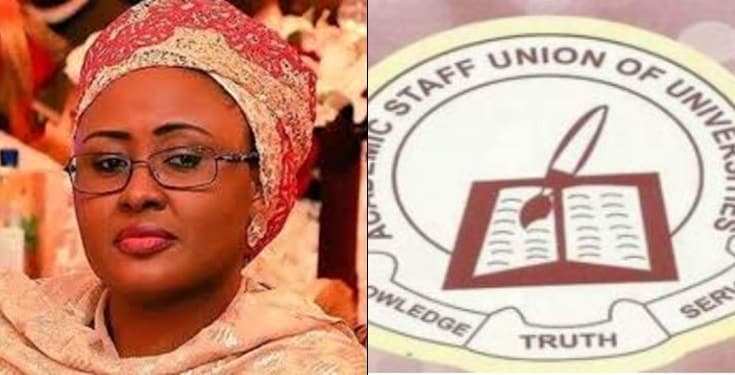 The Academic Staff Union of Universities (ASUU) has kicked against establishing a private University to be named after President Muhammadu Buhari. The union was reacting to a recent disclosure by the wife of the president, Aisha  Buhari, of the proposal.

ASUU Chairman, University of Ibadan, Professor Deji Omole and former national treasurer of the union, Professor Ademola Aremu, spoke in separate interviews with newsmen in Ibadan after Aisha Buhari had over the weekend at a townhall meeting in Yola announced her plan to establish a private university to be named after her husband in partnership with some foreigners.

Omole said: “When I heard about the proposed private university to be named after Mr President, I just looked at it as a joke taken too far. If we have a president in a country that has simply refused to fund public education and all we get from the first family is to establish a private university in collaboration with some foreigners, it is a disaster for this country and for a sitting president.

“The implication is that Nigerians should know that this leadership does not believe in public funded education. Nigerians should support the struggle for the government to take education as a core investment upon which this country will be liberated. It is not the children of the rich that will solve the problems of Nigeria but the children of the poor and the tool they need is quality in education.”

On his part, Aremu advised Mrs Buhari to influence policies of her husband’s administration to revitalise public-funded education.

“I don’t think that she is serious. We already have proliferation of universities and they are not taken care of them. Since her husband is a policy maker, should he now formulate policies that will ground public universities for their interest to thrive? I thought we have actually left that era. I could remember that Obasanjo established Bells and we condemned it. Atiku established his own as Former Vice President and we frown at it.

“If you have private interest, you should not hold public office. If you have interest in anything private thing, I think it is proper to actually leave the public space for those who want to serve the masses. How many people can afford the existing private universities  in the country? If you want to help education, then increase the capacity of the existing ones. When you are holding a public office, don’t establish a private concern. She should wait until Buhari is completely out of office before thinking of bringing a private university in whatever name.”

Uche Maduagwu vows to arrest Davido if he doesn’t marry Chioma; gives him 3...