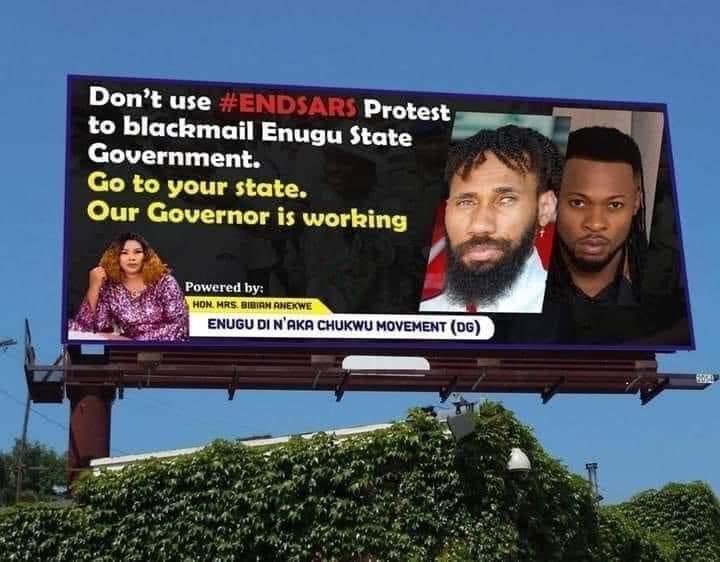 According to the honourable House of Reps member, the artistes are using the protest to blackmail the government of Enugu State.

Recall we earlier reported that Phyno, Kcee, Zoro cried out over threats to their lives by the Enugu State government following their peaceful #EndSARS protest in the state.

They further warned that if anything happens to them, the government of Enugu State should be held responsible.

Bibian has now setup a billboard which has the face of the artistes and asked them to go to their state, Anambra and protest as they are not indigenous of Enugu State.

The billboard says, “Don’t use #EndSARS protest to blackmail Enugu State Government. Go to your state. Our Governor is working.”

Reacting to the billboard, Patoranking who was infuriated by the message wrote;

“This is so shameful and I would advise, you use the same energy to End police brutality in Enugu state…Enugu people deserve better…Nigerians deserve better #endsars #Endpolicebrutality.”

This is so shameful and I would advise, you use the same energy to End police brutality in Enugu state…Enugu people deserve better…Nigerians deserve better #endsars #Endpolicebrutality pic.twitter.com/ey3HhY9sJz

Nonetheless, the lawmaker is currently receiving backlashes on social media.

“Bibian Anekwe you are a very big fool ! what nonsense is this ? See there is nothing honorable about you absolutely nothing ! shameless O Yes member ! See the daft ass licking people wey Dey do politics for us naa ! how this country wan take good?”

@Drmuzoic tweeted, “Whose mother/aunt/friend thought it wise to put up this nonsense? Is there no end to sycophancy? Anyway, they said ‘ala adighi mma bu uru ndi nze’. Let her enjoy the dividend of corruption for now. It will surely get to her. Tueh! #EndSARS.