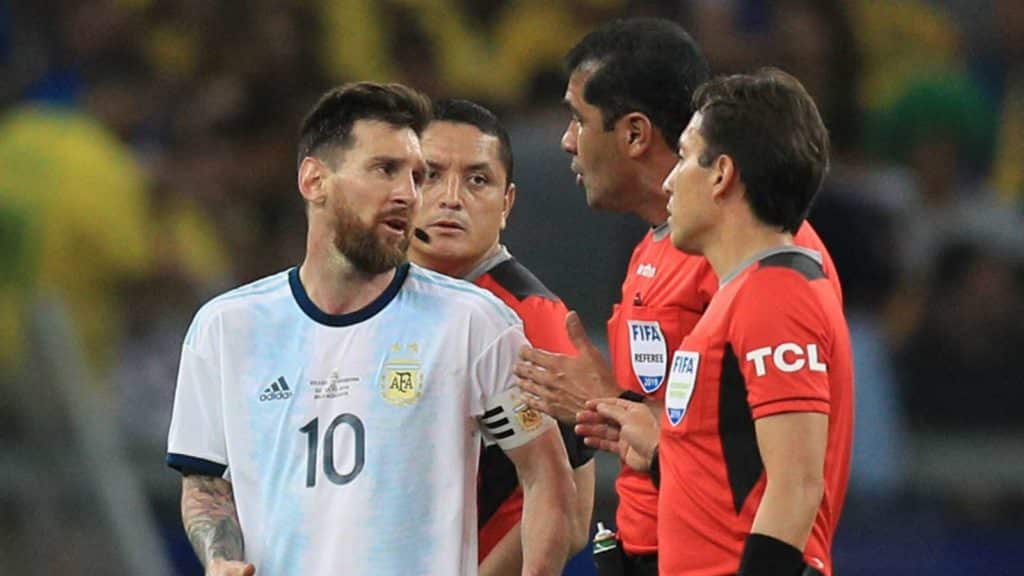 Referee Roddy Zambrano has explained his controversial decisions during the Copa America semi-final between Brazil and Argentina after Lionel Messi questioned his performance.

The Ecuadorian referee took charge of the contest that saw Brazil win 2-0, although did not award what appeared to be clear penalties for Argentina on two occasions nor use VAR in either situation.

Sergio Aguero was felled off the ball by Dani Alves in the first instance, while Arthur appeared to nudge Nicolas Otamendi over in the box in a separate coming-together but neither decision was given the Albiceleste’s way, with the official suggesting the first incident was actually a foul on Alves, while the second was a fair challenge.

He also confirmed that the VAR, which Conmebol confirmed in the aftermath had not been working properly ahead of kick-off , decided against overruling either call having looked at replays.

“It’s not a nudge [from Arthur on Otamendi], the VAR checked and determined that it was 50-50,” Zambrano told radio station Super K-800 . “They did not consider it to be a clear penalty.

“On the first play it is clear that Aguero steps in. It’s almost a reckless foul on the defender.

“I never lost contact with the VAR, that is totally false.

Gabriel Jesus notched the opener in the 19th minute after brilliant work from Alves down the right, and the Manchester City striker turned provider in the 71st minute as he charged down the left before cutting back and squaring for Liverpool forward Roberto Firmino to convert from close range in the aftermath of the Aguero incident.

Messi was particularly displeased with Zambrano’s decision-making and did not hold back when speaking to the media after the game, claiming the Ecuadorian’s performance was “bullsh*t” while questioning the fairness of the tournament as a whole.

“[Messi] is dedicated to playing and I never had problems with him, the truth is that I was surprised by his statements after the match, but everyone has their opinion.

“When the Argentina players said I was nervous, they were referring to the fact that I was annoyed because I am always serious when I referee.”

Brazil went on to beat Peru 3-1 in the final, with Everton, Jesus and Richarlison scoring for the Selecao, despite Jesus being shown a second yellow card and sent off with 20 minutes still to play.

Messi, meanwhile, saw his tournament end in more controversy as he was sent off in Argentina’s third-place play-off win over Chile, with the Barcelona superstar claiming the tournament was “corrupt” after the final whistle .