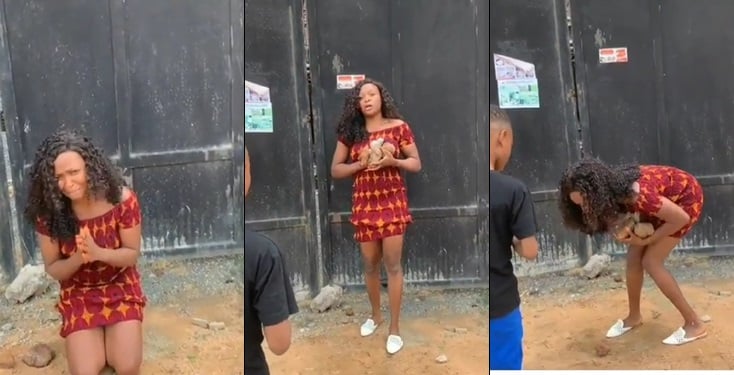 Just recently Blessing Okoro put out an apology in which she explained that she was under self-induced pressure to impress people and it led to her lying and claiming a seven bedroom mansion belonging to Onye Eze as hers.

Rather than let the drama fizzle out, Okoro, has stayed in the faces of social media users and tried too sway their focus from the drama that led to her becoming infamous.

Just shortly after apologising, the blogger put up a video in which she appeared to be mocking herself.

In the video which she shared on her Instagram, Blessing can be seen wearing the same dress she wore on the day she was humiliated by Onye Eze for claiming his house.

Okoro can also be seen holding her son as she marched to the front of an uncompleted building and started picking up stones from the floor.

When asked by the camera person what she was doing, she responded saying: “I am picking up the stones my ex-husband threw at me and I am using it to build myself.”