Home Entertainment News Everybody is mad, shut up your mouth or we will both shut... 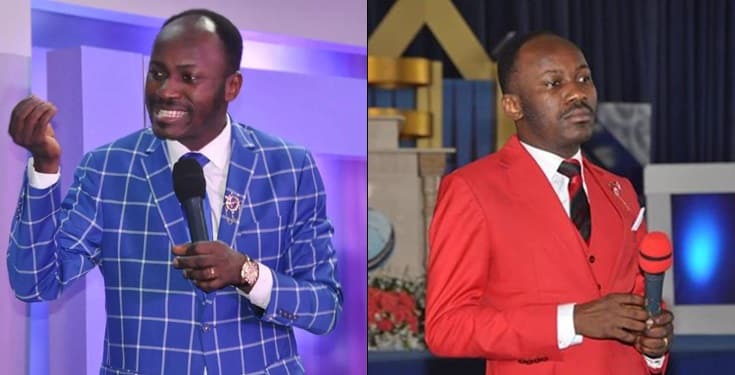 Apostle Johnson Suleman of Omega Fire Ministries has declared war on bloggers who write anything untrue about him, his family or his ministry. Hello

In a video which surfaced, Apostle Johnson Suleman stated that he has the capacity to shut down bloggers and that such can be done by his choristers alone.

”A blogger posted something about my father in the lord about 3 days ago and I sent him a message saying I am giving him six hours to take it down or he would not like me. You know these bloggers, it wouldn’t take anything to close them. How many people do we need to report a page? The church has got the numbers to mess up bloggers. I will only direct the Choristers a page to report and they will shut it down. You want drama, we will give you. That we are keeping quiet doesn’t mean bloggers should try nonsense, we can shut you down. What does it take to shut down an Instagram page? 100 to 200 reports and they will shut it down. If it comes up under three months, we report it again. Since you face the church, we face you. But we are giving you means of livelihood, don’t abuse it.

I have told my people that when I give order that they should, they should just start fighting. Everybody is mad, it is the one that takes off his clothes that people notice. Nobody has the monopoly of rascality.
Pastors have the number to shut down any blogger. Shut up your mouth or we will both shut your mouth and your blog. I told someone that if he thinks he is so relevant, he should not talk about Pastors for six months and his channel will close. What keeps it flowing is because of Pastors. We determine your next video.

Most of the women doing Youtube Channels, ask them for their husbands. Tell them to show you their husbands. Marriage has dealt with them. Life is hard on them so they are bitter.

We can shut down bloggers, the church has got the numbers- Apostle Suleman pic.twitter.com/OirRlIxHjg