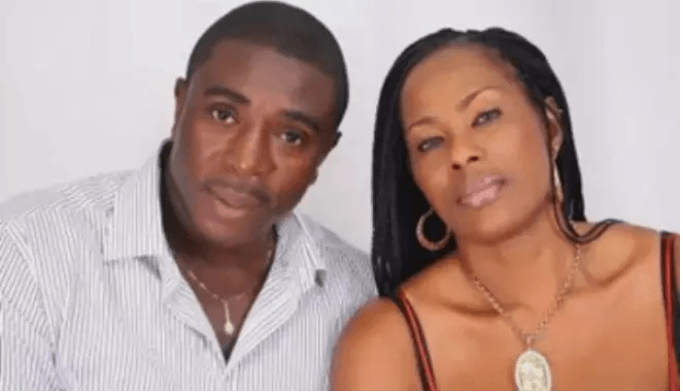 The rumours started as far back as 2013, when a story was published that Casandra was dead.The story claimed that a certain houseboy whom the couple brought from the village strangled the wife to death. Fast forward to few days ago, there was the same repeated story claiming she’s dead.

Casandra who is now fed up of the rumours, have taken to Facebook to debunk the rumours and cry out on how fake news has been affecting her family.

Read as she posted below…

“A lot of people undermine death. They forget that it is a grave occurrence and not something to be spoken lightly of or joked about. I know death. I’ve lived it. Death drains. It hurts. It changes you. It devastates you. It is bad. And it’s a very bad thing when you begin to wish a living person death

. What is it? Who’s behind this? I can’t continue running. I need to face my fear and that’s death. In the year 1998 both my parents and two of my younger siblings were poisoned and they passed away shortly after. I remember the cries of agony from my younger brother because ‘he didn’t want to die’. I remember him begging us to pray for him to live. I remember the struggles of my parents and my younger sister ripping her hair off from her scalp because she was in so much pain. Everything about my life changed. I witnessed the 4 open graves in my father’s compound. Yes, you read that correctly; they were poisoned. It was not an accident, illness or that they went to bed and didn’t wake up. The wicked and sick people who acted on their hate are responsible.
These articles that say “I died” or “My kids died” are ruining the life of my family

. How does someone make up such an evil story? My kids killed in a freezer while playing hide and seek? Me strangled or shot by a houseboy? Why would you come up with such an appalling, myopic and untrue article?! As kids, my children were so traumatized that going out was a problem because they feared that people will see them as ghosts and run

. It took the grace of God to counsel them and dispel that fear.
What is it? Do I really have to die for these article writers to be ‘satisfied’?? I got married just like every other girl and was happy in my marriage until I began to pay huge and unpleasant prices and witness haunting occurrences just because I married a popular figure. My freedom was taken from me. My children have no life, they don’t have friends and cannot freely do what other kids in their respective age brackets do without fear of unnecessary consequences. They live in a constant fear of the unknown. I have been attacked in unprovoked circumstances because of who I married. I have been slapped, hit, followed, tracked and spat at all because I am “Bob-Manuel’s wife. I fear for my life! And the life of my children!! In all this I ask, What is my offense? MARRIAGE???
I have had several kidnapping attempts. My son has had 3 close calls with kidnappers. My daughter who also had 3 close calls, laments everyday that she wants to live a normal life but she knows that that’s almost impossible….and that breaks me. It breaks my heart. It breaks my spirit that we are like show birds, pretty in a cage but with no freedom

I remember in 2013 just like right now, an article was published saying I had died. This exact picture and write up was trending on social media and was on google. It was a regular beautiful day for me till I started receiving so many alarming calls from my family, friends and acquaintances. My children and I were greatly and negatively impacted by that article. And again today the same thing!! July 27 2020! I cried bitterly because I am tired! Tired of being fake news, tired of being ‘dead’ when I am alive, tired of hiding and living in fear!!
What I truly do not understand is why someone keeps writing and circulating these articles. Do you not know that your writings are hurtful? That they are traumatizing? That they make people scared? Do you have no conscience?? PLEASE STOP! STOP HURTING US!!
I AM ALIVE. I AM NOT DEAD!
PLEASE POST, RETWEET AND RE-SHARE THAT I AM ALIVE!!!

AND I WILL NOT DIE. I WILL LIVE TO A 100 YEARS BEFORE I EVEN ‘THINK’ ABOUT DYING 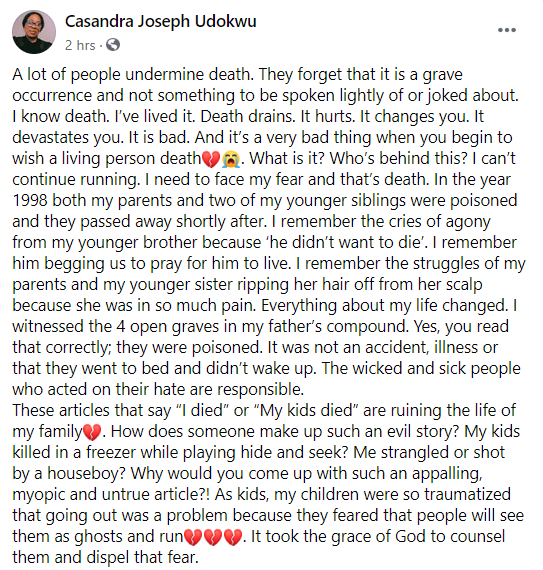 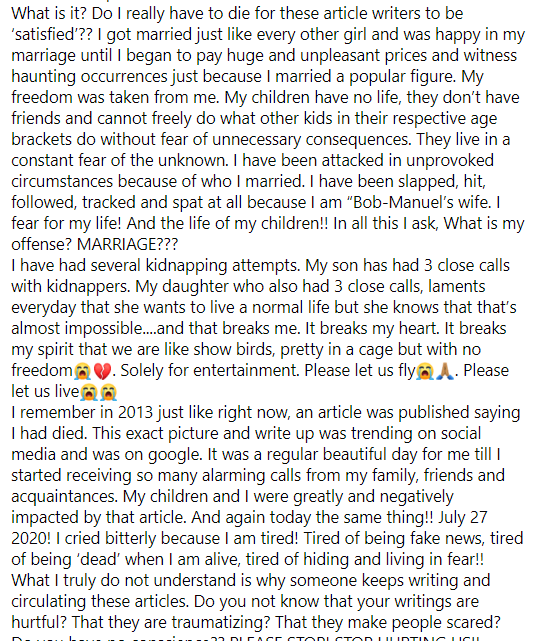