A 103-year-old Indonesian man has just married a 23-year-old. In a report by Oddity Central, the wedding took place in the regency of Wajo in the central Indonesian province of South Sulawesi.

The groom’s relative Ayu Anggreni Muchtar told local media, “Yes, the wedding was held this afternoon at the bride’s home on Galico Street!”

Ayu added that the centenarian groom’s name is Puang Katte while the bride’s name is Indo Alang.

He said, “I’m not really sure about their exact ages, but Katte is definitely over 100 years old.He was a fighter during the Dutch colonial era. His wife is still in her 20s.” 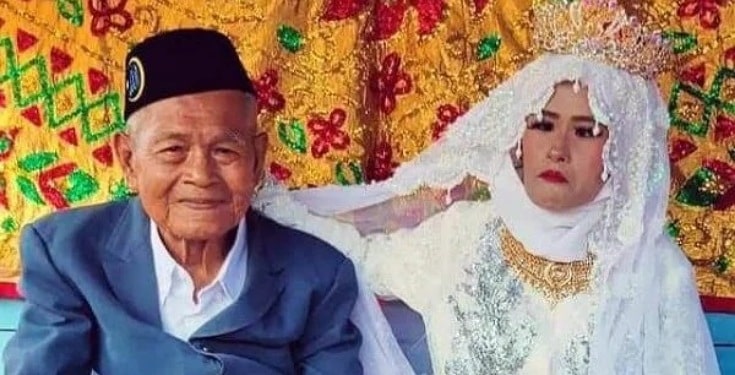 Ayu told local media that the elderly groom paid 5 million IDR (about R5 600, about $343) as the bride price as is customary during Islamic weddings.

According to reports, marriages with this large age gap are uncommon.

Another uncommon marriage in the region took place between a 71-year-old woman and a 16-year-old boy, according to local media. The country’s legal minimum age for women to marry is 16.

However, a loophole in Indonesia’s marriage law has reportedly allowed men to wed girls much younger.

Videos showing the hunched old groom being supported by a young man as he staggers down the aisle to meet his young bride have been shared on Facebook and Twitter, putting the question of arranged marriages into question once again.

Interestingly, the dowry paid by Katte to his bride’s family wasn’t that substantial, according to local media reports. he allegedly only paid 5 million rupiah ($343) and a gold ring. The two are currently living at the groom’s house in South Sulawesi.