A Nigerian writer and journalist Osayimwen Osahon George has shared his opinion on the ongoing rumors that Wizkid slept with Victoria Kimani.

In his write-up, Osahon argued that there is every possibility Kimani slept with the Nigerian star as she has not come out to debunk the story.

The beef between rappers M.I and Vector has revealed alot. From allegations of homosexuality, to mismanagement and Jesse Jagz’ disappearance and other issues relating to their personal lives, the audience seems to have been furnished with too much details.

A random Twitter user named Pearl Ometosa who seems to be in the know attacked Victoria Kimani, a Kenyan ex signee of Chocolate City who seems to have a bad relationship with M.I. She accused her of sleeping with Wizkid while he openly dated Tania Omotayo. In fact, it was alleged that Aunty Victoria as I want to address her out of respect once escaped through the window on one occasion when Tania caught them together. For a minute, I doubted it because I believe such emergency exit routes are mostly for men but it appears Aunty Victoria has got fast feet too and could easily evade danger. The lady further alleged that Aunty Victoria’s private sessions with Wizkid were so incessant that M.I and Ice Prince had to go beg Tania to ease her anger and prevent her from hurting Aunty Victoria.

As I read the short story, I was deeply praying in my heart for Aunty Victoria to debunk the allegation in it’s entirety. It was hard to believe. My hands were shivering and my mobile phone almost fell off. If Aunty Victoria had contacted me for help, I would have issued a very long, compelling, and powerful press statement disregarding the accusations as if I was a eye witness. But what is really my business in this case? The truth is em…em…..emmm. I will say the truth; I have a serious crush on Aunty Victoria. Since I saw her in a video with M.I (Oya ft M.I, released in 2014), during the early days of her musical career, I wanted to know her but fate never brought her my way. I wasn’t alone with the admiration, even Runtown must have been crushing on her that he put it in a song. You remember his lines in one of his hit singles ‘Gallardo’ featuring Davido? He was like ‘She fine like Victoria Kimani’. That line made me jealous because I felt he stood a chance of going ahead of me to win her heart. If I had links with the National Broadcasting Commission, NBC, I would have banned the song or censored that line. But I had no sure influence then, I was still in Ibadan trying to figure life out. I thought the feeling was going to fade away but it got worse when Aunty Victoria released the visuals of her single ‘Show’ produced by Tekno in 2014. 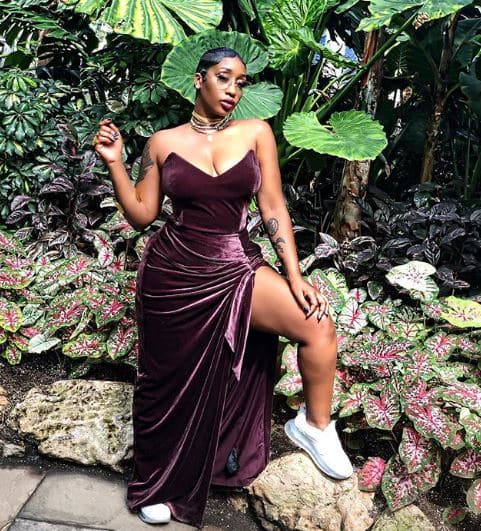 My world came crashing when I watched her dance in a scantily-clad form. Then the Shoki dance was in vogue. I swear, she killed it better than some Nigerian ladies. I have never seen a foreigner do a local dance better than the indigenous people. When Aunty Victoria turned her back to the camera, I almost suffered convulsion. The curves and her bum were perfect, they must have been molded in heaven on a Monday morning before fatigue, inadequate resources, and distractions set in. I kept playing the video over and over again. As for her voice ehn…it gave me the feeling and inspiration singer Slimcase gets from Codeine Diet. I know some people will say she is short but I am used to ‘women looking up to me’ by virtue of my superior height.
Let me stop describing my feelings for her so that I can stand a chance of forgiveness if my girlfriend gets to read this.

Aunty Victoria didn’t pity her fans like me. Her response to the tweets shattered the table beyond repair. She revealed that she is at liberty to sleep with whosoever she wants, however, and in any position.

“I can sleep with who I want, how I want, in any position I want. So what’s next”

I almost passed out but I changed my mind thinking it would be dangerous since I was home-alone. Who would have resuscitated me? I am not sure I cried but I just noticed water flowing down my cheeks from my eyes. I didn’t believe my actions, they were highly involuntary. There is the possibility someone was cutting onions in the neighborhood. Trust me, I am hardly moved to tears. When former dictator, Sani Abacha died, I didn’t cry. I also did the same when my neighbour’s Alsatian dog got electrocuted. I wonder why I felt and reacted differently to the case of Aunty Victoria

Aunty Victoria’s response reeks of a clear admittance of guilty. It is a blatant case of a failed attempt by the accuser to shame the shameless. It would be recalled that Aunty Victoria who doesn’t fake or hide her feelings has been supporting Vector against M.I. This angered the accuser and she made an attempt to hurt her by going public with the rare information. To me, this news is as bad as Atiku Abubakar realizing he is not a Nigerian and then deciding to return to Cameroon to start a new life. I wept 13 times as I slowly sipped my very chilled Tigernut drink; I couldn’t come to terms with the StarBoy drilling the oil well of my crush. The imagination is turtuous.

After some wraps of Indian Hemp washed down with an expensive wine while lodging in a cosy 5star hotel room, Wizkid invites Aunty Victoria to dance for him. She twerks in her underwear with her rounds hips like the Abuja yam and her bum like the front of Bobrisky’s new Range Rover SUV. He smacks the bum intermittently, while Aunty Victoria not minding the age difference of five years between them laughs hysterically like the hyena. After uttering some incoherent words out of intoxication, Wizkid hops on Aunty Victoria on bed and begins to dissect her like a dead frog displayed in a Biology class. It’s sad!

Let me stop imagining the sex scenarios to ease my pains. In my next incarnation, I would love to be a musician and not a journalist. I wonder what I have done to Aunty Victoria to deserve this deep and sharp pain caused by her response.

As for Wizkid, that boy don enjoy life sha. Even if he dies tomorrow, he will still be thankful and fulfilled. Aside the money and the fame, the best of women have been rumoured to have ‘come under his management’. From Tonto Dikeh to Tania Omotayo to Aunty Tiwa Savage to Victoria Kimani and thousands of other women if I am allowed to be hyperbolic.

Aunty Victoria has never hidden her hatred for Aunty Tiwa. When she did her version of ‘Bleep You Challenge’ by Kizz Daniel, she directed it at Aunty Tiwa. She accused her of falsifying her age and prostituting. Since then, I have been wondering where the bad blood came from. I think I know the source. It might not be far from the fact that Wizkid might be marking the scripts of both parties with the same pen.

Dear Victoria Kimani, I want you to issue a full statement denying any amorous relationship with Wizkid so that I can sleep well. I still have a feeling you didn’t do it. Something tells me you are a virgin and that you might be waiting for me lol.