Virgil van Dijk has been named the UEFA Men’s Player of the Year for 2018-19, seeing off competition from Lionel Messi and Cristiano Ronaldo.

The Liverpool defender was crowned at the ceremony for the Champions League group stage draw on Thursday.

Van Dijk kept five clean sheets in 12 appearances as well as scoring two goals and contributing two assists as the Merseyside club lifted the trophy for a sixth time.

Van Dijk was also integral to the Netherlands’ run to the inaugural Nations League Finals in June, where they beat England 3-1 after extra-time in the last four before losing to Portugal in the final. 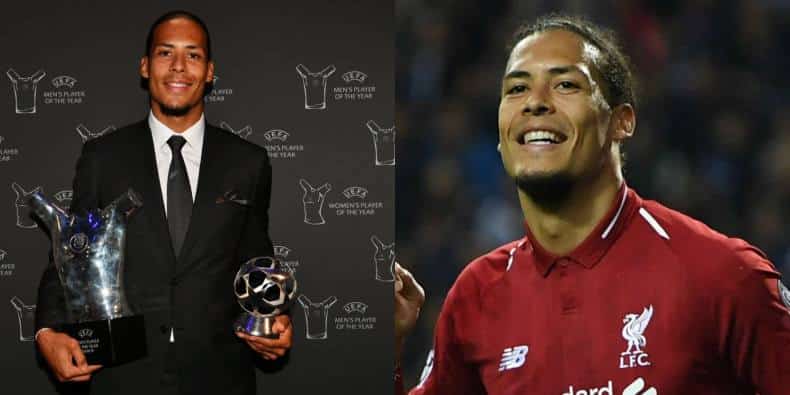 The Brazilian kept six clean sheets during Liverpool’s Champions League run, including in the final where he made eight saves in the Reds’ 2-0 win over Tottenham.

Frenkie de Jong claimed the midfielder award ahead of Tottenham’s Christian Eriksen and Liverpool captain Jordan Henderson. The Netherlands international played a key role in Ajax’s memorable run to the semi-finals, which included victories over Real Madrid and Juventus.

His performances unsurprisingly saw him attract interest from some of Europe’s biggest clubs, with Barcelona ultimately winning the race for the 22-year-old in a £65 million ($81m) deal.

Burnley fan Scott Cunliffe was joint winner of the UEFA #EqualGame Award, which honours those who highlight diversity, inclusion and accessibility in football. Cunliffe ran to every single Burnley away match during the 2018/19 season, raising more than £54,000 for the club’s charities.

Borussia Dortmund were also honoured for their work in tackling tackling far-right extremism among their fanbase, challenging racism and adopting a clear policy on the humanitarian rights of refugees and asylum-seekers.

The first award of the evening went to Manchester United legend Eric Cantona, who collected the President’s Award from UEFA President Aleksander Ceferin to honour his illustrious playing career and charity work.