For taking giant strides in his service to the nation and commitment to uplifting the underprivileged, seemingly hopeless and vulnerable in the society, the 2018 graduate of Mass Communication from University of Benin (UNIBEN), Emmanuel Oluwasayomi Ahmadu, popularly known as Mr Voiceover, has been bestowed with numerous outstanding awards following his impacts during his service year in Kwara State and Nigeria at large. 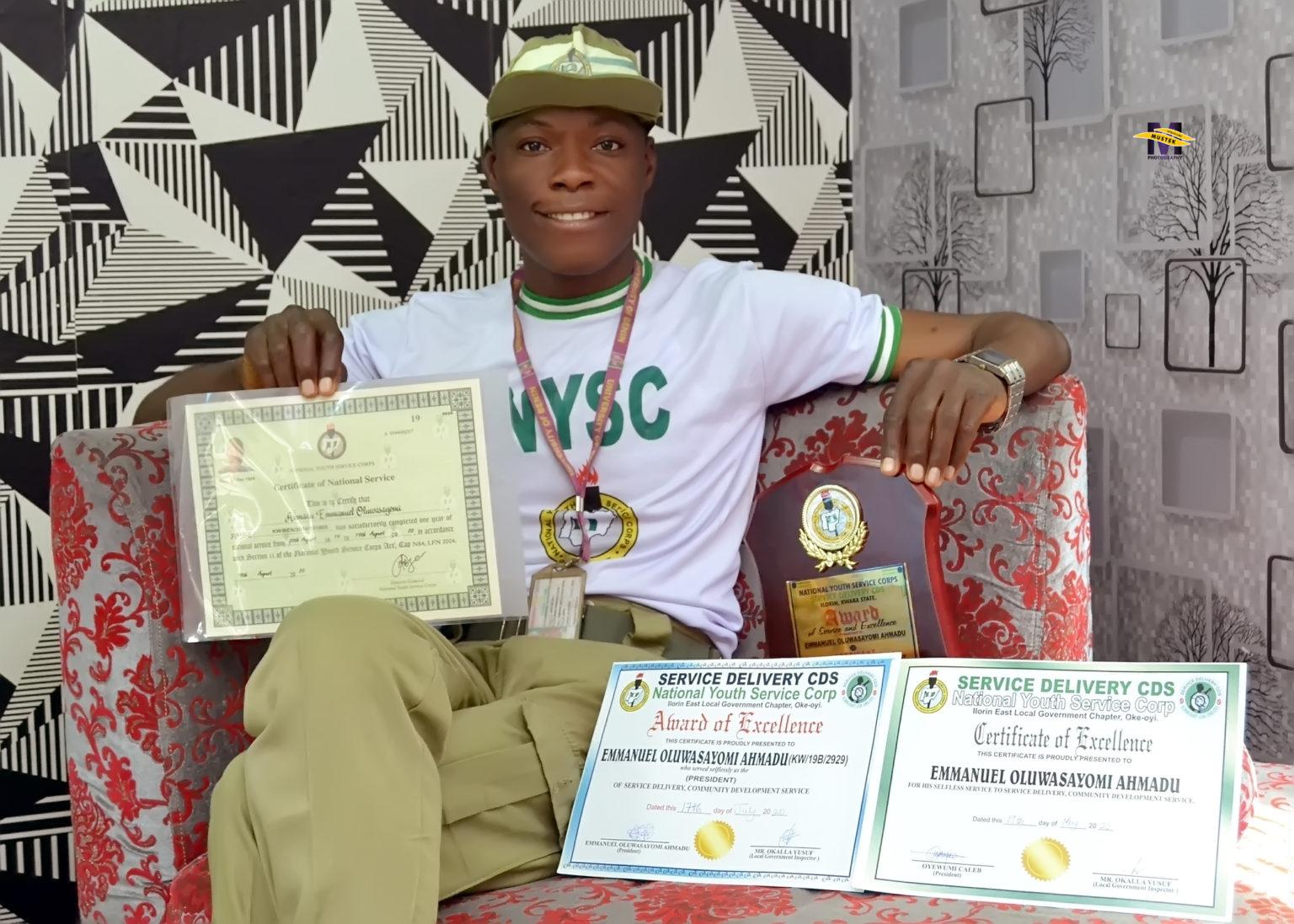 Emmanuel was commended for his outstanding performance and sterling qualities as a member of the NYSC during the Batch B Stream II, 2019 passing out parade ceremony on Thursday, 16th July, 2020, at the National Youth Service Corps Secretariat Oke-Oyi in Ilorin East Local Government Area of Kwara State.

Imbued with passion to positively impact on society and provoke change, Emmanuel, who was deployed to Kwara State for the mandatory national service in 2019, executed several personal community development projects to address some critical social amenity needs of his host community and State.

The Kogi State-born Mass Communication graduate had during his time in Kwara State distributed preventive kits (face masks) to Five hundred (500) community households and teamed up with NYSC, Kwara State Government COVID-19 Team, NGOs, Traditional Rulers, Community Leaders and Volunteers on the sensitization of thousands of community dwellers on safety measures against Covid-19 in Oke-Oyi Community in Ilorin East Local Government Area, to prevent the spread of the virus among the vulnerables in the community.

On the health front, Emmanuel channeled his meagre resources towards tackling the increasing menace of depression, hopelessness, despair and suicide attempt which has become a serious societal challenge that have received little attention over the years.

Laden with this crucible yet driven by passion and love in his heart to restore hope to those going through mental insecurities heightened by social pressures, he volunteered his wealth of experience to spare head series of personal projects on “Mental Health Awareness And Sensitization Programmes” in Kwara, Edo and Kogi, focused on tackling the menace of depression and suicide in Nigeria, reaching over 200,000 young people and adults in schools, campuses, communities amongst other social institutions. 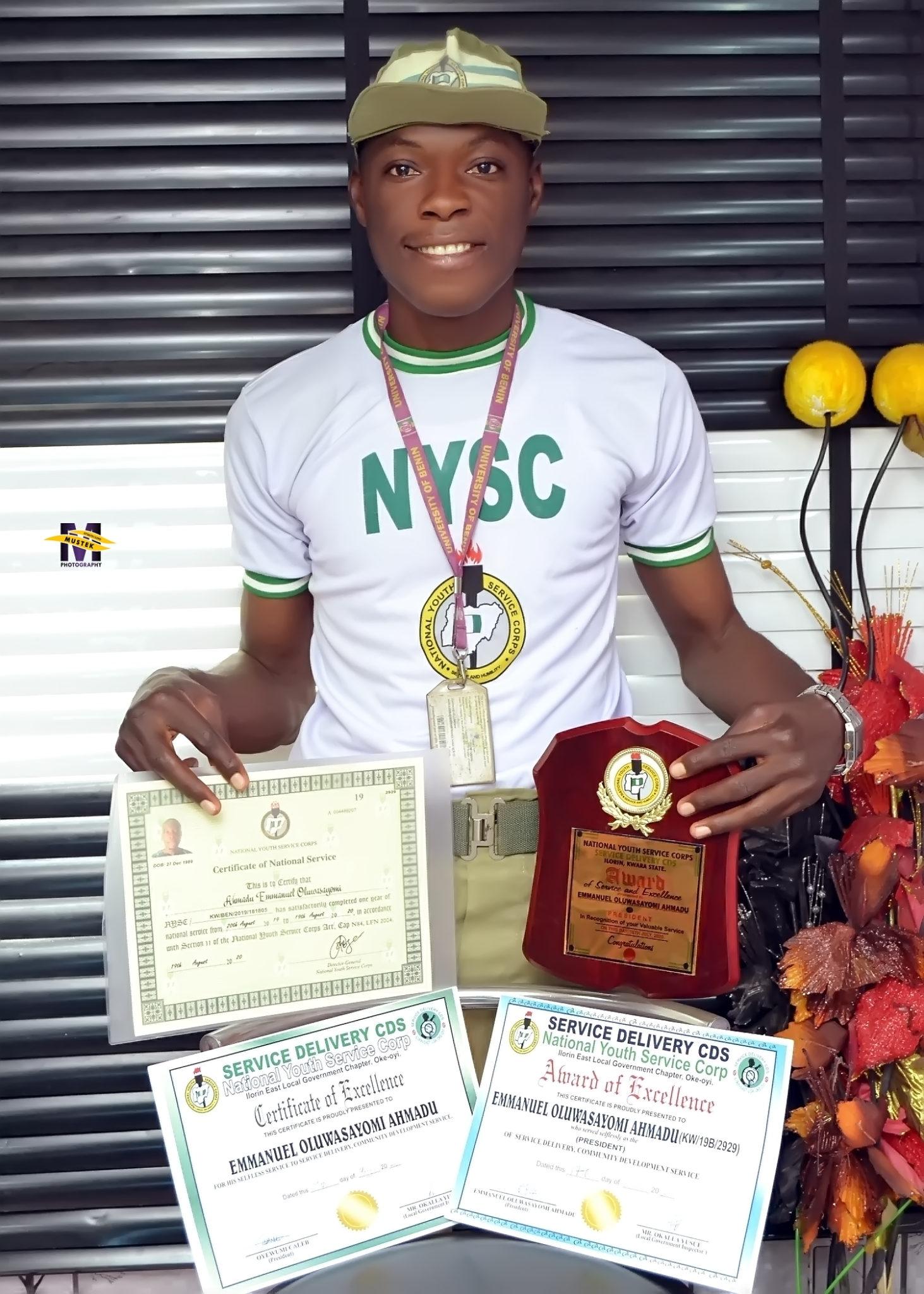 Emmanuel researched depression to be one of the major societal problems globally and thought it wise to tackle the menace which has emerged as a predominant challenge in Nigeria leading to young persons and adults taking their own lives and indulging in societal vices, due to inability to cope with societal pressures, thereby giving rise to hopelessness, cultism, exam malpractices, drug abuse, rape, robbery, trafficking, prostitutions, school dropouts, teenage pregnancy, internet frauds, suicide and other societal misconducts prevalent among adolescents and youths in the country.

The Kogi-born Corps member discovered that depression as a mental illness occurs in different stages which ranges from the mild stage to the moderate stage and to the severe stage. In the mild stage of depression, the individual experience some symptoms of which is the best time to seek help or professional counsel before it get worse. He said that most people don’t speak up to get help from the appropriate quarters or they do not know where to go when they face mental distress, they rather prefer to endure the pain and die in silence, unless they are able to find trust to share their pain with someone who won’t judge them or better still, someone who have gone through similar or worse experience and have come out strong.

So he planned to make it one of his personal community development projects under the NYSC scheme in Kwara State to host ‘Mental Health Awareness And Sensitization Programmes’ that could serve as platform to bring together survivors, relevant NGOs, agencies, mental health advocates and free professional mental health services to the people at their door steps in schools, campuses, communities, mosques, churches and other social institutions inorder to meet the psychological and mental needs of these people and giving them a reason to regain hope once more. His project successfully reached and restored hope to fifty (50) selected secondary schools across three (3) Local Government Areas and Community in Kwara in One Hundred and Fifty Four (154) days.

Speaking on the occasion of the award, Emmanuel said he believed that the true essence of life is embedded in service to humanity, and that is why he is going all out to ensure that mental insecurity does not become a plague in Nigeria and beyond.
He revealed that millions of people have been thrown into hopelessness, despair and depression in Nigeria affecting both the rich and the poor, due to the impact of the global pandemic (covid-19). It has been predicted by World Health Organisation (WHO, 2018) that depression will rise in 2020 to become the second most prevailing health problem in the history of the world, leading to increased suicide rates, societal misconducts and mental health issues.

Speaking on his aspirations, the international award winner, who is an anti-depression and suicide advocate aspires to be the hope in the mind of troubled adolescents and youths in Africa. According to him, he seeks financial support to complete the registration of his NGO with hope of joining forces with International and national agencies, brands, state governors, NGOs, stakeholders and individuals who mean well in tackling this leading cause of death in communities, high schools, campuses amongst other social institutions across Nigeria and Africa.

According to him, the impact of the global pandemic (Covid-19) is leading to increased suicide rates, societal misconducts and mental health issues amongst young people and adults.

“Being a survivor of depression whose success story has made headlines globally and have served as a source of hope to millions of people worldwide, thereby contributing towards tackling depression and suicide menace, I have written a precise proposal ready for submission to identifying my story as a symbol of hope with any telecommunication brand who sees mental security of Nigerians as a priority both during the covid-19 and post covid-19.

I wish to contribute my wealth of experience by partnering as a brand ambassador on corporate social responsibility with any telecommunication brand to serve as a platform where people who are going through emotional trauma, hopelessness, depression and suicidal thoughts can speak up to get help through professional support.
I await ready hands and burdened heart to join me in paddling the canoe that sails affected people off the shore of depression and suicide, it begins with you!” He said