It is no longer News that actress Toyin Abraham and colleague, Kola Ajeyemi are married and we have got a first official wedding portrait of the love birds!

The portrait was released online moments ago by the couple’s media publicist with the aim of confirming that their union is indeed now official.

However, we have exclusively gathered that the wedding portrait was released following the arrival of Toyin Abraham’s baby.

A close source confirmed to Kemi Filani Newsthat the wedding photo was released ahead of the big announcement of the arrival of Toyin’s new born baby…“so that people will not go to town with the talk that, like Linda Ikeji, Toyin had a baby out of wedlock” the source confirmed. 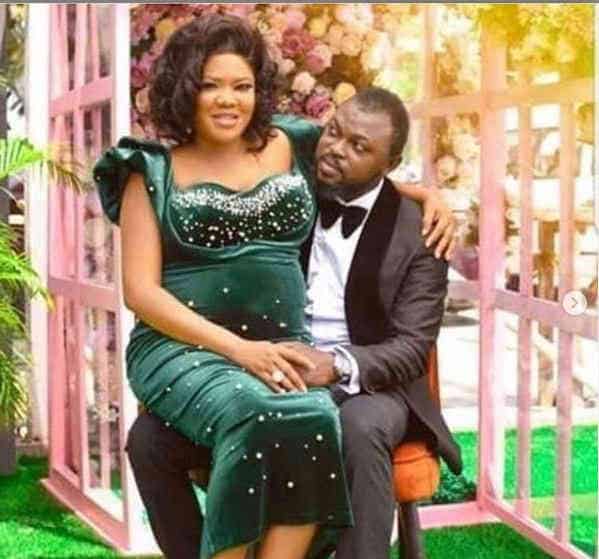 It has further been confirmed that both Mother and child are doing okay in the US. “Congratulation is in order!!!!d baby has even landed ha! See God ooooo Awilo gave mama pikinat last oooooooo (Tho, sorrow may last for a night,but joy comes in the morning)” another source who shared the photo below confirmed.

We say congratulations to Toyin and Kola Ajeyemi on the arrival of their newborn baby.

Interestingly, Toyin who had her baby shower abroad some weeks ago, has joined the list of celebrities known for deleting all their Instagram photos.

Before her decision to take down all her photos hours ago, Toyin had one of the most beautiful and active Instagram pages with over 3.3 million followers.

Apparently, she is starting a clean slate to celebrate the arrival of her tiny feets that she has always wanted and looked forward to welcoming.