Ronaldinho took part in a behind-bars football match at his Paraguayan prison on Friday and wiped the floor with the other inmates, scoring five goals and assisting six in an 11-2 victory.

The 39-year-old, who played for Barcelona, AC Milan and PSG, has been detained after being arrested for allegedly trying to enter the South American country using a fake passport along with his brother. 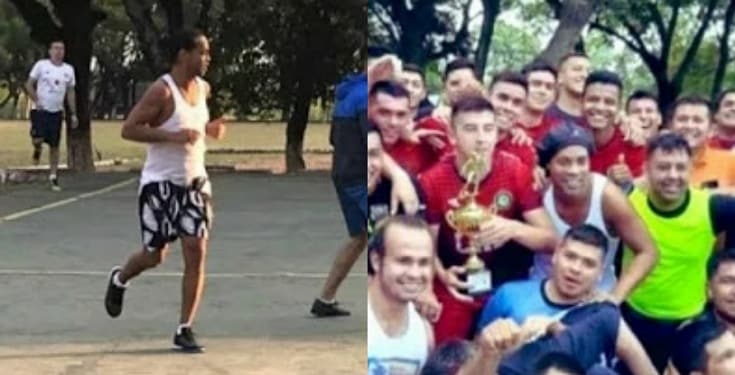 Ronaldinho has been locked up for the past week and it had been reported that the Brazilian footballing icon had been persuaded to take part in a prison tournament.

Paraguayan newspaper Hoy now report, however, that Ronaldinho was reluctant to do so – despite the prize of a 16kg suckling pig going to the winner – though did play a match on the small-sided futsal court instead.

According to the reports, Ronaldinho was talking to one of the prison guards near the pitch when other inmates saw him and encouraged him to join in, which he eventually did.

The World Cup winner took on some notable Paraguayan inmates, including former politician Miguel Cuevas who had the unenviable task of man-marking Ronaldinho.

He didn’t fare very well, though, with Ronaldinho having a hand in all 11 of his side’s goals in the thumping win, scoring five and assisting the other six.

Ronaldinho had reportedly struggled when he first arrived at the Paraguayan jail, but prison warden Blas Vera says his mood has improved, telling Reuters: In broad terms he is doing very well.

“I see he is in good spirits, just like you see him on television, always smiling.”

He added: “Since yesterday he looks very well, he talks to his other inmates, he goes out to the patio.”

Ronaldinho and his brother’s lawyer, Segio Queiroz, has asked that the pair be released from jail and put under house arrest instead, while another legal representative, Adolfo Marin, says the former Barca star is stupid and was unaware that travelling to another country with a false passport was illegal.