A Ghanaian police officer has been captured in a video that is fast going viral as he rejected an amount of money that was to be used to bribe him and strongly warned the driver not to repeat that. 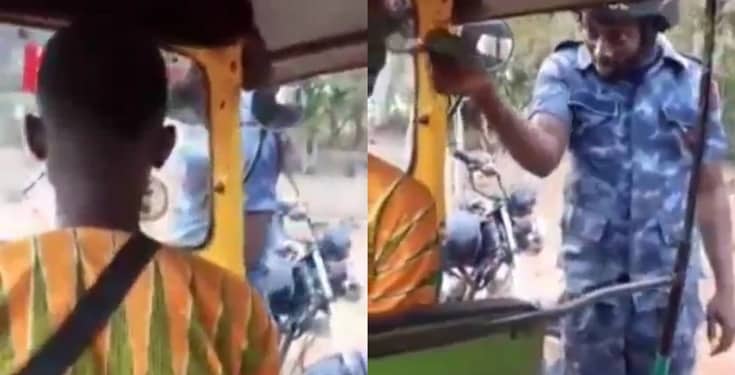 The identity of the police officer is not fully confirmed but it appears as though he comes from the Volta Region and resides in an Akan community as he spoke Twi with a minor Ewe accent.

In the video the officer stopped the vehicle commonly known as ‘Mahama Camboo’ to make some checks.

He requested for the license of the driver, which the driver gave out with an amount of money embedded in it.

It could be clearly spotted in the video that the police officer instantly became visibly angry when he saw the amount of money, for which he asked the driver to park and wait.

Within a short moment, he was back asking the driver why he would do such a thing. At this point, the driver started to apologize.

“Your money would not do anything for me, as I take more salary than you yourself. Are you aware how much I am paid a month?” the officer angrily asked the driver.

The footage appears to have been secretly recorded by a passenger who was probably trying to catch the officer in the act of bribery but was pleasantly surprised instead.