The Enugu Police Command orders the immediate investigation and sanction of a policeman involved in a viral video assaulting a woman. 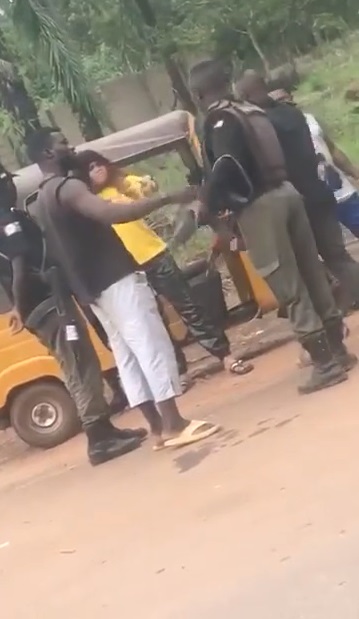 In a video making rounds on social media, a police officer is seen verbally assaulting a woman whom he called an ashawo – prostitute.

The officer pressed on to physically assault the lady, twice on the head with slaps as others policemen hold him back for taking such an action.

Spokesperson of the command, ASP Daniel Ndukwe, said the Commissioner of Police, Abubakar Lawal, ordered immediate investigation and sanction of the policeman involved.

“Meanwhile, the said lady and eyewitnesses to the incident have been enjoined to visit the State CID Enugu to volunteer their statements in order to facilitate the meticulous and swift conclusion of the investigation

“Also, residents of the State have been enjoined to promptly report Police Officers of the Command found conducting themselves in an unprofessional manner to the nearest Police Station or by calling the Command’s emergency hotlines on 08032003702, 08075390883, 08086671202 or 08098880172. Or alternatively send an Email to: contact042ppro@gmail.com”