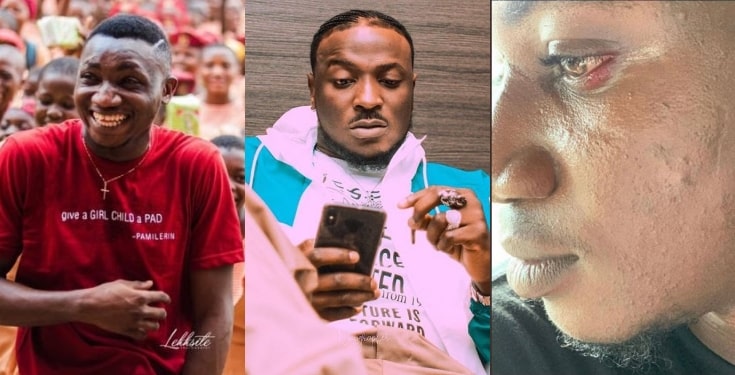 As social media goes gaga over the news of Peruzzi attacking a social media influencer, Pamilerin, the artiste has seen the error in his ways and he has apologized publicly.

He took to micro-blogging platform, Twitter, to issue a public apology. The musician posted an apology to Pamilerin and the general public in the tweet below;

“I did very wrong for yesterday slapping mr pamilerin, let my feelings get the best of me and I am very sorry. Apologies to mr pamilerin and also to the general public. I’d never get into such mess again. Love Only, I promise.”

The music star earlier made confirmed the assault during a radio chat with Dotun of Cool FM. According to him, he accosted the popular social media influencer because of his continuous inciting statements concerning his career and that of Teni the Entertainer.

Dotun then asked him if he actually slapped him when they saw each other in Bayelsa to which he gave an affirmative response.

“I slapped him. It was wrong, but I’m a human being,” he said. On why he slapped him, Peruzzi said, “I didn’t assault him o, I wanted to have a conversation with him and it didn’t turn out well.”

He then went on to apologise to Pamilerin for slapping him and adviced him to stay away from him.

“I’m sorry for slapping you. I’m sorry for hitting you… You do not have to like my music, but please do not insult me, leave me alone,” he said. It would be recalled that the news of Parezzi assaulting Pamilerin hit the internet a few hours ago.

The influencer popularly known as Pamilerin and Dr. Pam Pam narrated his alleged ordeal in the hands of Peruzzi and his crew in Bayelsa. According to him, he was about to leave Bayelsa for Port Harcourt after an event when he was accosted by a man who then pulled him down from a bus and dragged him before Peruzzi. In a statement credited to Pamilerin by LindaIkejablog, he narrated how he was allegedly assaulted by the singer.

“What did I go to Bayelsa for, I had no idea I was going to come back to Lagos with a mini swollen eyes, all thanks to your fav for blessing me with that. I would have stayed in my Lagos and enjoy the traffic in peace. After the event it was time to go back to Lagos and face traffic, I got into the bus that was taking us to PortHarcourt from Bayelsa, next thing I heard was, come down here, then I felt heavy hand pull me down. All I could hear was, are you AYE(cult), I could not respond because I was lost in thought. What is happening I said to myself. Then this guy dragged me where Peruzzi was standing. Ohh, it’s you, I said to myself.

“Next thing, your superstar Peruzzi pulled me up with the help of his bouncer holding my hands, the next thing I heard was boom. Is that from THOR I said to myself. He started screaming, don’t you ever tweet about me again, you are mad, who do you think you are. This continued to about 20 minutes, everyone around was shocked and dumbfounded, he said how on earth will I compare him with Teni ???? He said he does not care, but this is you abusing me after 6 months. Bearing in mind that I tweeted on the 6th January 2019. When the whole comparison between himself and Teni surfaced online. I simply asked our gentleman not to compare himself that Teni has put in lot of work, so she deserved to be given her moment and credit,” he said.