Home Viral News ‘No woman wearing trousers has ever and will ever enter heaven’ –...

With various religious beliefs comes a variety of opinions and views on the things considered moral and the ones considered immoral and unacceptable.

While the matter of decency remains a debated issue in most religions despite the liberal view generally held, it appears there are some people who still hold strongly to their stringent belief on the matter.

One of such people is Facebook user and evangelist, Dapo Soyemi, who recently got social media users talking after he took to the platform to state that no woman wearing trousers, has ever and will ever enter heaven.

“No woman wearing trousers has ever and will ever enter heaven. Your objection cannot change the truth of God.” 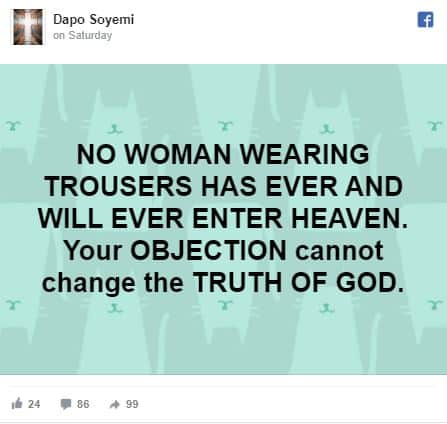 “I’m not surprised you don’t know me, Gutter people won’t know me” — Reno Omokri drags Joe Igbokwe to filth, for saying he doesn’t...