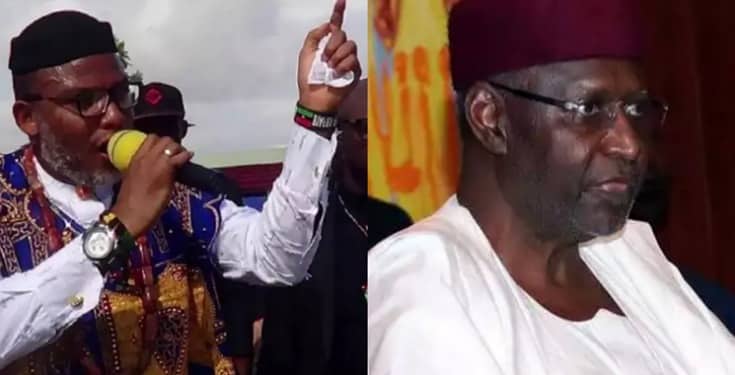 Mazi Nnamdi Kanu, the leader of the Indigenous People of Biafra, IPOB, has reacted to reports that the Lagos State government does not know the whereabouts of Abba Kyari, President Muhammadu Buhari’s Chief of Staff.

The Lagos State Commissioner for Health, Prof. Akin Abayomi, had on Tuesday said he did not know the whereabouts of Abba Kyari, contrary to reports that the CoS is at the Mainland Infectious Disease Hospital (IDH) Isolation Center in the State.

Recall that Kyari on Sunday informed Nigerians, via a letter, that he tested positive for COVIID-19 and would be in Lagos on Monday for further tests based on medical advice.

However, Nnamdi Kanu, who claimed that Abba Kyari is not in the country but in Cuba receiving the best of treatments for Coronavirus, said the comment by Prof Abayomi has confirmed his (Kanu) earlier revelation.

“The liars, forgers and deceivers that rule Nigeria will never stop lying, they will never stop deceiving the poor and hungry masses, who they are now starving and beating to death over COVID-19 containment measures,” he wrote on Facebook.

“This is the same de facto president, Abba Kyari they lied to you is at the Mainland Infectious Disease Hospital (IDH) Isolation center in Lagos.

“This is the Abba Kyari who in truth & reality is in Cuba with pet Jubril Al-Sudani receiving treatment for Coronavirus infection he contracted when he played the role of a president in Germany.