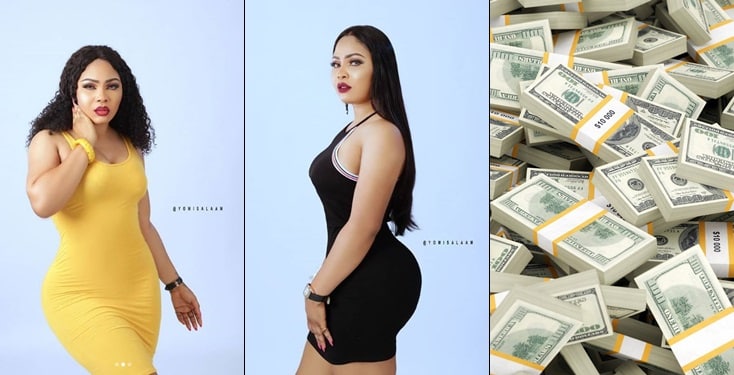 Actress, Oluchi Sharon Francis has revealed that not only does she have a penchant for great movies with beautiful themes, but she has no respect and love for any man that can’t afford to buy himself a Pierre-Cardin Tuxedo to grace the red-carpet.
While speaking with Potpourri, Sharon Francis said:
“It hasn’t been so rosy, I must say…but that big man up there has been faithful. My victories have been more than my obstacles because till date I’ve done so many movies that I can’t easily recall. But guess what?
There isn’t a single movie of mine that has not been a blockbuster. I’ve starred in movies like ‘Street of Canaan’ , ‘Black Cats’ , Red Mafianm’, to mention a few” she added.
She then stated that any man that is not financially stable and could not afford the luxurious things of life, should back off:
“ First and foremost, I would like to render an apology to all the broke guys all around the world because heaven knows that I can’t be caught dead with a man that can’t get a Pierre-cardin tuxedo for an emergency red carpet event.
Then love…This is the most beautiful thing in the whole world and I would really feel accomplished if God gives me a man that loves me. Don’t get me wrong, he doesn’t have to be Dangote but he should be able to get me a surprise gift that would really get me ‘financially horny and emotional’ on my birthday.
‘Financially horny’ in the sense that money works on me like a reflex action…especially when it comes with respect and reasons. A young successful man as a boyfriend could get a hot s3x for buying me some massive karats of gold. In a nutshell, finance gets me emotional and horny” she declares.
Hot and suave Nollywood actress, Oluchi Sharon Francis knows what she wants out of life and sure knows how to go about getting it. It may be noteworthy to watch out for her as she is gently building a legacy in the make-believe enclave.
Related Topics:sharon francis
Up Next