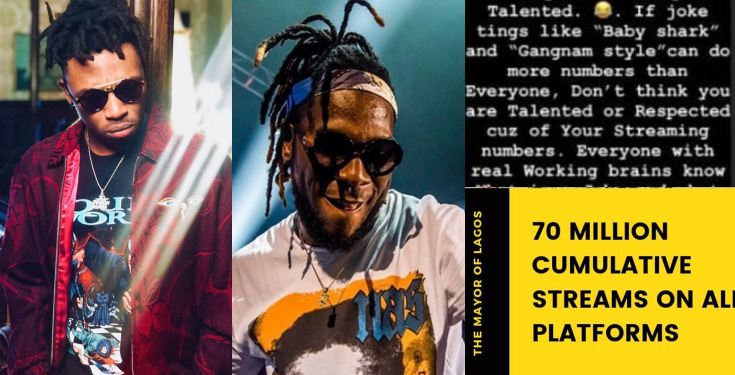 Mayorkun has fired back at Burna Boy over a post he made about streaming numbers which appeared as a shade.

Burna Boy took to Instastories this morning where he stated that streaming numbers doesn’t mean an artiste is talented.

He stated that if viral joke songs like ‘Baby Shark’ and ‘Gangnam style’ could have amazing streaming numbers, then no one should get overly excited about the millions of views they get on the internet.

His statement was seen as a reaction to Mayorkun’s post some few days back in which he celebrated attaining 70million streams across different platforms.

Reacting to Burna Boy’s post, Mayorkun reminded him that he also got into limelight via streaming when his song titled Ye was mistaken by many fans as a song belonging to Kanye West who’s also known as Ye.

Imagine blasting me on top streams when e be sey na because if Kanye West na him Ye take blow. It’s all love down here still #DMW