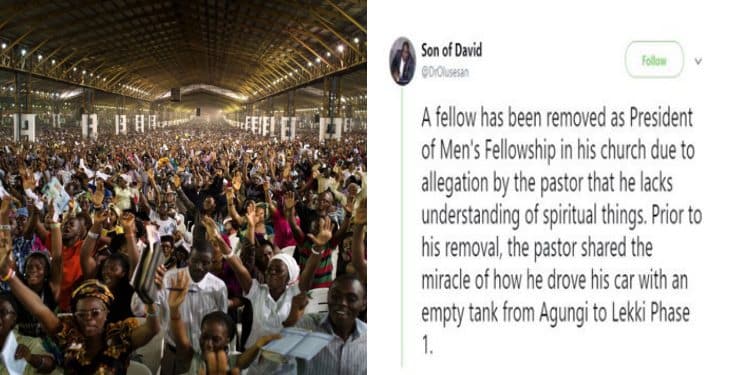 A Twitter user has narrated how a Nigerian man serving as the President of Men’s Fellowship in his church, was removed from his position for criticising his Pastor’s testimony.

“A fellow has been removed as President of Men’s Fellowship in his church due to allegation by the pastor that he lacks understanding of spiritual things. Prior to his removal, the pastor shared the miracle of how he drove his car with an empty tank from Agungi to Lekki Phase 1.”

The pastor narrated that his car fuel ’empty’ light blinked and the engine went off. And when he prayed the vehicle started. Saturday after, at Men’s Fellowship, the fellow that was removed presented a talk in PowerPoint presentation titled, ‘Car Fuel Tank Reserve & Their Sizes.”

He showed in slides, d owner’s manual of pastor’s car. That when d car fuel ’empty’ light blinks and the engine stops, it is a warning d car has switched to its fuel reserve. That the fuel reserve still holds 15liters, which can take anybody from Lekki to Sagamu, without prayers.