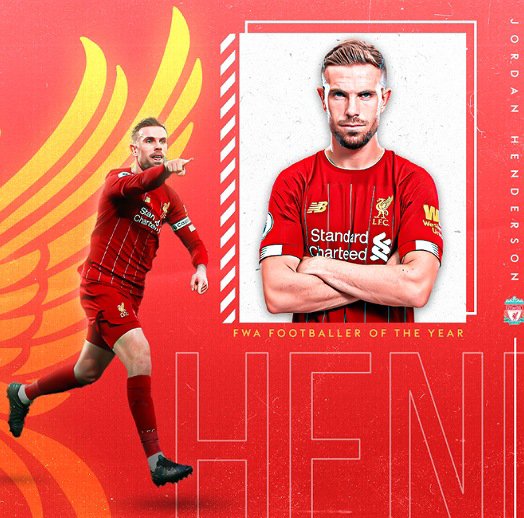 The 30-year-old midfielder, who led Liverpool to their first league title in 30 years this season, received more than a quarter of the votes.

“As grateful as I am I don’t feel like I can accept this on my own,” he said.

“I owe a lot to so many people but none more so than my current team-mates, who have been incredible and deserve this every bit as much as I do.”

BREAKING: Jordan Henderson has been crowned the Football Writers' Association Footballer of the Year for the 2019/20 season.

On Wednesday Henderson, who is recovering from a knee injury, received the Premier League trophy from Reds legend Sir Kenny Dalglish at a near-empty Anfield.

Henderson added: “I accept [the award] on behalf of this whole squad, because without them I’m not in a position to be receiving this honour. These lads have made me a better player – a better leader and a better person.

“If anything I hope those who voted for me did so partly to recognise the entire team’s contribution.”

Off the pitch, Henderson has helped raise money for the NHS as part of the #PlayersTogether initiative.