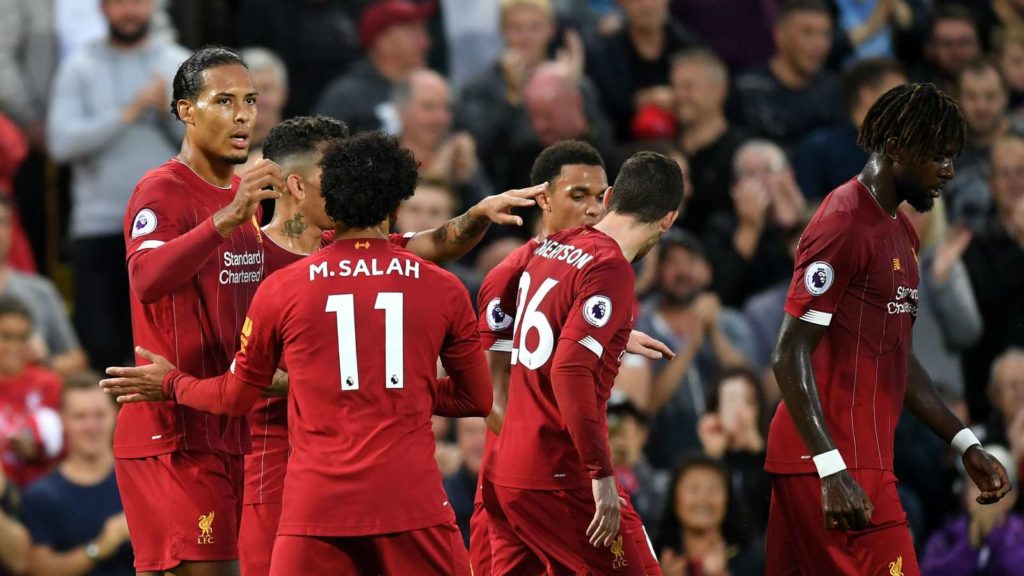 Liverpool kicked off the new Premier League season with a convincing 4-1 victory over Norwich City at Anfield on Friday.

Last season’s record-breaking runners-up Liverpool wasted no time in setting about getting maximum points, with Mohamed Salah and Virgil van Dijk adding to Grant Hanley’s comical own goal within the opening 30 minutes.

Divock Origi made it four in the 42nd minute on his 100th Reds appearance but Jurgen Klopp’s side were unable to add to their tally and Teemu Pukki netted a consolation strike for the newly promoted side.

However, the real sour note for Liverpool was the loss of goalkeeper Alisson, who had to be replaced by debutant Adrian in the first half after appearing to sustain a hamstring injury taking a goal-kick.

Liverpool got off to a flying start when Origi’s cross from the left wing was diverted into the back of the net by Norwich captain Hanley in the seventh minute.

Marco Stiepermann wasted a second decent chance to get the Canaries on the board and they were punished when Roberto Firmino teed up Salah to slide a cool finish past Tim Krul.

Norwich continued to threaten but Van Dijk made light work of shaking off Jamal Lewis to power in a header from Salah’s corner.
Despite losing Alisson to injury, Liverpool remained in the ascendancy and took a four-goal lead into half-time when Origi nodded Trent Alexander-Arnold’s fine delivery home.

Krul tipped a shot from Jordan Henderson onto the crossbar early in the second half and, after Salah kept the ball alive and played in Alexander-Arnold with a delightful backheel, Firmino was unable to convert from the England defender’s cutback.

Moritz Leitner rattled the upright with a swerving effort as the Canaries regained some courage and they were rewarded when Pukki found the bottom-left corner from Emiliano Buendia’s incisive throughball.

Alexander-Arnold’s powerful free-kick was saved well by Krul in the 85th minute and Adrian kept out Onel Hernandez in stoppage time as Liverpool comfortably saw out a routine victory.

What does it mean? Liverpool off to a flyer

Liverpool wasted no time in signalling their intent this season. Their rapid start saw them score three goals in the opening half hour of a Premier League game for the first time since February 2014, when they hit four in that timeframe in a 5-1 thrashing of Arsenal.

Had Stiepermann and Pukki taken the early chances that came their way, however, it could have been a very different story.

Origi steps up
His Champions League heroics last season earned Origi a new Liverpool contract and the chance for an increased role in 2019-20. With Klopp not introducing Sadio Mane, who only returned after his exploits with Senegal at the Africa Cup of Nations on Monday, until the 74th minute, the Belgium international proved he can be relied upon by creating two chances in addition to his goal.

Blunders at the back
After Hanley’s miskick ended up in the back of his own net, a fortunate ricochet as Norwich failed to clear their lines ended with Salah doubling Liverpool’s advantage. Sloppy defending from full-backs Lewis and Max Aarons then enabled Van Dijk and Origi to increase the gap and the game was effectively over before half-time.

What’s next?
Liverpool head to Istanbul to take on Chelsea in the UEFA Super Cup on Wednesday, while Norwich will try to pick themselves up at home to Newcastle United next Saturday.