Home Sport Lionel Messi is not a God – Pope Francis 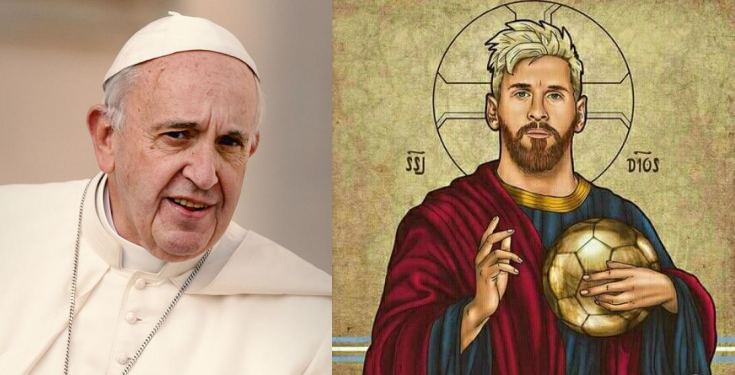 Pope Francis admits to taking “joy” from the ability of fellow Argentine Lionel Messi, but is eager to point out that the Barcelona talisman “is not God”.

Many consider the mercurial South American to be a sporting deity, with his achievements raising the bar of individual excellence.

He is worshipped as a hero by millions around the world and has seen his record-breaking on-field efforts lead to him being showered with praise and major honours – both collective and individual.

A five-time Ballon d’Or winner may not seem human to some, but Pope Francis feels it is wrong to bestow labels of “God” onto those who are mere mortals.

Asked by Spanish television show Salvados on La Sexta whether such a billing for Messi could be considered sacrilegious, as it breaks the third commandment by using the Lord’s name in vain, Pope Francis said: “In theory, it’s a sacrilege.

“You can’t say it and I don’t believe it. I think people say ‘he is God’ just as they say ‘I adore you’. You have to adore only God.

“It’s expressions that people use. This is a god with the ball on the pitch. It’s a popular way that people have of expressing themselves.

Pope Francis is known to be a football fan.

He is a member at Argentinian side San Lorenzo, having been born and raised in Buenos Aires, and has mingled with stars of the sporting world in the past.

During the summer of 2013, Messi and the rest of the Albiceleste squad took in a meeting with Pope Francis at the Vatican.

Messi and his international team-mates also sent a signed shirt to Pope Francis on the back of their display at the 2014 World Cup which saw them finish as runners-up to Germany.

They are back in the trophy hunt for 2019, with the next staging of the Copa America in Brazil fast approaching.

Messi will be excepted to lead the charge once again for his country in that competition, as he waits on a first senior title with Argentina, but he has recently admitted that the pressure placed on his shoulders and the reaction of those in his homeland to his performances can be difficult to handle at times.